You are here: Home / Class 11 / Chemistry / Structure of Atom / Shapes of Atomic Orbital

An orbital is the region of space around the nucleus within which the probability of finding an electron of given energy is maximum.

The probability at any point around the nucleus is calculated using schrodinger wave equation and is represented by the density of the points.

For the coordinates( x, y, z) of the electron with respect to the nucleus, schrodinger Wave equation can be solved to get the values of the orbital wave function ψ. But Ψ has no physical significance. The square ψ2  has the significance as it gives the electron probability density of the electron at that point.

1) The probability of 1s electron is found to be maximum near the nucleus and decreases as the distance from the nucleus increases.

3) The intermediate region where probability is zero is called nodal surface or node. 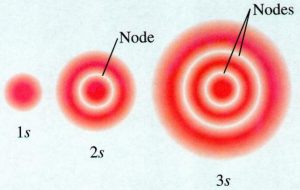 2s orbital differ from 1s orbital in having node within it.3s has two nodes.Any ns orbital has ( n-1) nodes. 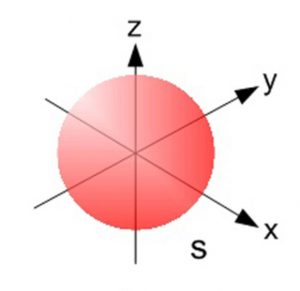 1) The probability of finding the electron belonging to a s orbital of any main shell is found to be identical in all directions at a given distance from the nucleus. Hence s – orbital is spherical in shape which is symmetrical around the nucleus.

1) the number of nodes

2) size and energy. These increases with increase in principal quantum number, n.

It is found that the probability of finding the electron is maximum in two lobes on the opposite side of the nucleus. This gives rise to dumb-bell shape for the p orbital.

For p orbital l= 1, m = -1, 0, +1 .Thus  p orbital has three different orientation designated as px, py, pz  depending upon whether the electron density is maximum along the x-axis,  y axis and Z axis.

P orbital have directional characteristics and hence are helpful in predicting the shape of molecules.

As n increases these p orbitals become larger in size and have higher energies. The three p orbitals belonging to a particular energy shells have equal energies and are called degenerate.

There are 5 d orbitals, depending upon the axes along which or between which their electron clouds are concentrated, their names and shapes are:

d z2 has a doughnut shaped electron cloud in the centre whereas  others clover leaf shape.