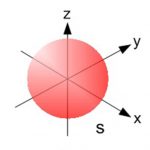 An atom contains a large number of orbitals. These are distinguished from each other on the basis of their shape ,size and orientation in space. These characteristics of an orbital are expressed in terms of three numbers, called principal, azimuthal and magnetic quantum number. Quantum numbers may be defined as a set of 4 numbers with the help of which we can get complete … END_OF_DOCUMENT_TOKEN_TO_BE_REPLACED 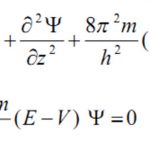 ​Quantum mechanics, as developed by Erwin Schrodinger in 1926, is based on the wave motion associated with the particles. For the wave motion of the electron in the three dimensional space around the nucleus, he put forward an equation known as Schrondinger wave equation. where ψ is the amplitude of the wave where the coordinates of the electrons are( x,y,z) ,E is the … END_OF_DOCUMENT_TOKEN_TO_BE_REPLACED