Postulates of Bohr’s model of an atom 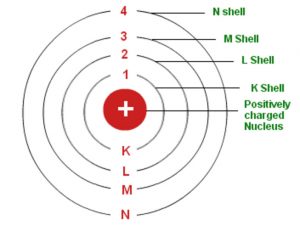 1) An atom consists of a small, heavy positively charged nucleus in the centre and electrons revolve around it in circular orbit.

2) The electrons revolve only in those orbits which have a fixed value of energy. These orbits are called energy levels or stationary States. The energy of the electron revolving in a particular orbit is fixed and does not change with time. The different energy levels are numbered as 1,2,3,4…. or designated as K, L, M, N ,O….. starting from the shells closest to the nucleus. 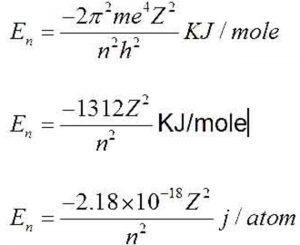 Where Z is the atomic number and n stands for energy level.

The first energy level(n=1) which is closest to the nucleus has lowest energy. The energy of the levels increases as we move outwards starting from the first level.

b) The radii of the stationary states of the hydrogen atom are given by the expression:

Where a0= 5.29 pm is the radius of the first stationary state and is called Bohr’s radius.

For hydrogen like particles ,the radii of the stationary state are given by the expression:

3) Since the electrons revolve only in those orbits which have fixed value of energy ,hence electrons in an atom can have only certain definite or discrete values of energy and not any value of their own. The energy of an electron is quantized.

4)Like energy, the angular momentum of an electron in an atom can have certain definite or discrete values and not any value of its own. The only permissible values of angular momentum are given by the expression: 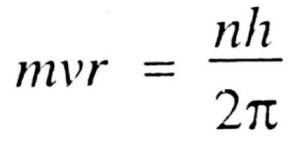 Where m is the mass of the electron, v is the tangential velocity of the revolving electron, r is the radius of the orbit, h is the Planck’s Constant and n is any Integer.

The angular momentum of an electron in an atom is also quantized.

5) When the electrons in an atom are in their lowest energy state, they keep on revolving in the respective orbits without losing energy because energy can neither be lost nor gained continuously. This state of atom is called normal or ground state.

6) Energy is emitted or absorbed only when the electron jumps from one orbit to the other. When energy is supplied to an atom ,an electron in the atom may jump from its normal energy level to some high energy level by absorbing a definite amount of energy. This state of atom is called excited state .Since the lifetime of the electron in the excited state is short, it immediately jumps back to the lower energy level by emitting energy in the form of light of suitable frequency or wavelength.

The amount of energy emitted or absorbed is given by the difference of energies of the two energy levels concerned ie.

Where E2 and E1 are the energy of the electron in the higher and lower energy levels ΔE  is the difference in energies of the two levels.

Energy is always a emitted or absorbed in certain discrete quantities called quantas or photons and not any value.

Quantization  means that a quantity cannot change gradually and continuously to have any arbitrary value but changes only abruptly and discontinuously to have certain definite or discrete value. Electron revolve around the nucleus in certain fixed circular orbits in which they can continue revolving without gaining or losing energy. The energy of the electron cannot change continuously but can have only definite values. Thus, we can say that energy of an electron is quantized.

1) It explains the stability of the atom: An electron cannot lose energy as long as it stays in a particular Orbit.

2) It explains the line spectrum of hydrogen: An electron neither emits nor absorbs energy as long as it stays in a particular orbit. When an atom is subjected to electric discharge or high temperature, an electron in the atom may jump from the normal energy level ie. ground state to some higher energy level ie. excited state. Since the lifetime of the electron in the excited state is short, it returns to some lower energy level or even to the ground state in one or more jumps. During each such jump, energy is emitted in the form of a photon of light of a definite wavelength of frequency.

The frequency of the photon of light the emitted depends upon the energy difference of the two energy level concerned and is given by :

Corresponding to the frequency or wavelength of each Photon emitted, there appears a line in the spectrum.

Limitations of Bohr’s model of atom

1)Inability to explain line spectra of multi-electron atom :When spectroscope with better resolving power were used, it was found that even in case of hydrogen spectrum, each line was split up into a number of closely spaced lines which could not be explained by Bohr’s model of an atom.

3)Inability to explain the three dimensional model of atom.

4)Inability to explain the shapes of molecules.