​Neils Bohr, a Danish physicist in 1913 proposed a new model of atom. This new model is called Bohr's Model of atom. Postulates of Bohr's model of an atom 1) An atom consists of a small, heavy positively charged nucleus in the centre and electrons revolve around it in circular orbit. 2) The electrons revolve only in those orbits which have a fixed value of energy. … END_OF_DOCUMENT_TOKEN_TO_BE_REPLACED 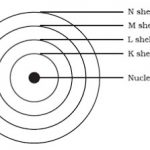 Question 1 Describe Bohr's model of an atom? Question 2 How did Neil Bohr's explain the stability of atom? Question 3 Why is an atom neutral inspite of the presence of charged particle in it? Bohr's Model Of An Atom 1) An atom is made up of three particles: electrons, protons and neutrons. Electrons have negative charge, protons have positive charge whereas neutrons … END_OF_DOCUMENT_TOKEN_TO_BE_REPLACED