This theory was put forward by Heitler and London in 1927 and was further developed by Pauling and others.

When the two atoms are far apart from each other there is no interaction between them.

When they come closer to each other ,the new forces come into operation.

These forces are of two types:

1)The forces of repulsion between the nuclei of these combining atoms and between the electrons of these atoms. These forces tends to increase the energy of the system.

2)The forces of attraction between the nucleus of one atom and the electrons of other atom. These forces tend to decrease the energy of the system.

If we have two hydrogen atoms A and B kept at infinite distance from each other. There will be no interaction between them. But as they begin to come closer, the following new forces will start operating: 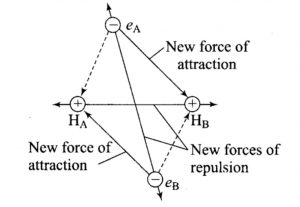 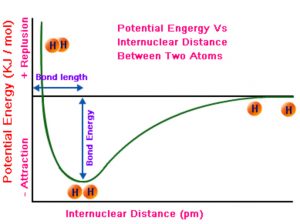 1)Force of attraction between nucleus of A and electron of nucleus B.

2)Force of attraction between nucleus of B and electron of A.

3)Force of repulsion between electrons of the atoms.

4)Force of repulsion between nuclei of the two atoms.

In hydrogen ,the magnitude of the attractive forces is more than that of repulsive forces. As a result, the potential energy of the system decreases and a molecule of hydrogen is formed .

The distance between the two nuclei is called Bond length.

If we want to break the bond ,i.e. to separate the atoms, we have to supply the same amount of energy.

A stronger bond is that which requires greater energy for the separation of atoms.

The energy required to break one mole of bonds of the same kind is known as bond energy or bond dissociation energy.

As a result of these interaction ,repulsive forces dominate over the attractive forces and so the energy of the system increases. Hence, no chemical bond is possible.

Energetically ,the formation of helium molecule is not possible because there is an increase in the potential energy of the system when two Helium atoms approach each other.

A covalent bond is formed by the partial overlap of the two half filled atomic orbitals containing electrons with opposite spins.

The partial overlap means that a part of the electron cloud of each of the two half filled atomic orbitals becomes common. The probability of finding the electrons in the region of overlap is much more than at other places.

The strength of the bond depends upon the extent of overlapping. Greater the overlapping ,stronger is the bond formed.

When two hydrogen atoms having electrons with opposite spins come close to each other, their s orbitals overlap with each other resulting in the union of the two atoms to form a molecules.
Formation of HF molecule 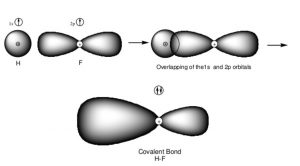 When one atom of fluorine having 1 unpaired electrons in its p orbital come closer to the hydrogen atom with electron of opposite Spin in its 1s orbital ,then the two half filled orbitals overlap each other and chemical bond is formed between the two atoms.
Formation of fluorine molecule