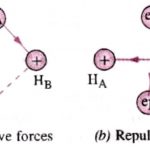 This theory was put forward by Heitler and London in 1927 and was further developed by Pauling and others. In terms of energy When the two atoms are far apart from each other there is no interaction between them. When they come closer to each other ,the new forces come into operation. These forces are of two types: 1)The forces of repulsion between the nuclei of … END_OF_DOCUMENT_TOKEN_TO_BE_REPLACED