The bond formed between the two atoms by mutual sharing of electrons between them so as to complete their octets or duplets in case of elements having only one shell is called covalent bond and the number of electrons contributed by each atom is known as covalency.

Two chlorine atoms combine to produce chlorine molecule. Each of them contributes one electron to form shared pair. By doing so ,both of them complete their orbits and acquired stable configuration.

In the formation of HCl , H and Cl contribute one electron each which is then shared by both so as to complete the duplet of hydrogen and octet of chlorine. 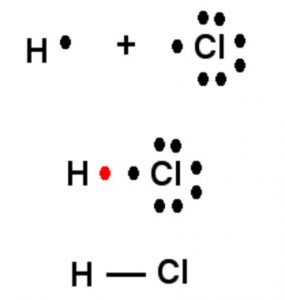 Bond formed by the contribution of one electron by each of two atoms is called single covalent bond.

Bond formed by contribution of two electrons by each of the two atoms is called double covalent bond.

Bond formed by contribution of 3 electrons by each of the two atoms is called triple covalent bond. 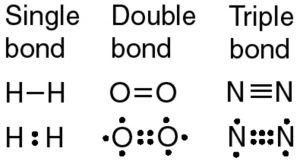 The valence electrons not involved in bonding are shown as such and are called non bonding electrons or lone pair or  unshared pairs.

Step 1 Calculate the total number of valence electrons of the atoms present.

Step 3 Select the central atom and draw the skeleton structure by guess to indicate which atom is linked to which other atom. Hydrogen and fluorine usually occupy terminal position.

Step 4 Put one shared pair of electrons between every two atoms to represent a single bond between them. Use the remaining pairs of electrons either for multiple bonding or to show them as lone pair, keeping in mind that octet of each atom is completed.

Question Write the lewis structure of nitride ion, NO2 ‾

Total number of valence electrons in NO2 ‾ is 9.

Putting a single bond between O and N and N and O we have,

Formal charge on an atom in a molecule 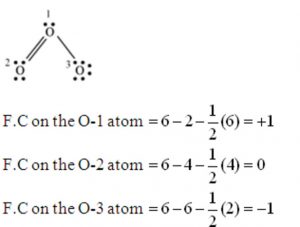 It helps to select the most stable structure i.e the one with least energy out of the different possible Lewis structure. The most stable is the one which has the smallest formal charges on the atoms.

Limitations of the octet rule

1)Formation of compounds having hydrogen : As hydrogen atom has only one shell containing one electron, it needs one more electron to complete its shell i.e to acquire the nearest noble gas configuration of helium. Hence hydrogen needs to complete its duplet and not octet.

2)Formation of compounds like BeCl2, BF3, AlCl3 :In each of these molecules, the central atom has less than 8 electrons i..e these are electron deficient compounds.

3)Formation of compounds like PCl5, SF6, IF7, H2SO4 :The central atom has more than 8 electrons.

Again the octet rule is violated in this molecules.

4)Formation of compounds of noble gases

Noble gases which have already complete octets should not form compounds. However, their compounds like XeF2, XeF4, XeF6,KrF2 have been prepared.