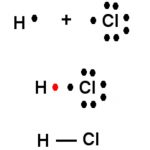 The bond formed between the two atoms by mutual sharing of electrons between them so as to complete their octets or duplets in case of elements having only one shell is called covalent bond and the number of electrons contributed by each atom is known as covalency. Examples Two chlorine atoms combine to produce chlorine molecule. Each of them contributes one electron to … END_OF_DOCUMENT_TOKEN_TO_BE_REPLACED