The experimental technique of measuring energy changes accompanying any chemical or physical process is called calorimetry.

These measurements are generally carried out under 2 condition 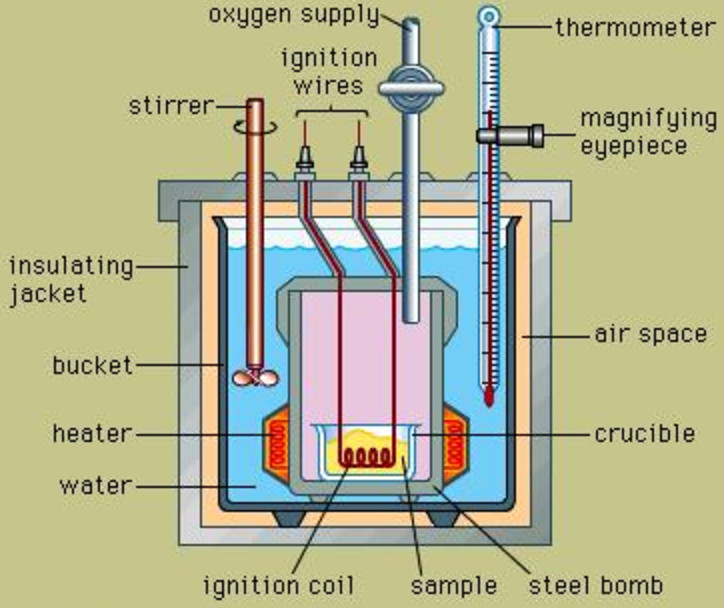 It consists of a strong steel vessel which can stand high pressure. It is surrounded by a bigger vessel which contains water and is insulated. A thermometer and a stirrer are suspended in it.

1) A known mass of compound is taken in the platinum cup.Oxygen under high pressure is introduced into the bomb. A current is passed through the filament immersed in the compound. Combustion of the compound takes place. The increase in the temperature of water is noted. From this, the heat capacity of the apparatus can be calculated.

2) The experiment is repeated as in  step 1.As the reaction is carried out in a closed vessel, therefore, heat evolved is the heat of combustion at constant volume and hence is equal to internal energy change.

The value of ΔU can be calculated using the formula

where Q =heat capacity of the calorimeter

m= mass of the substance taken

M =molecular mass of the substance 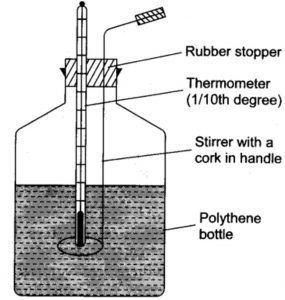 Taking the example of heat of neutralisation of an acid with a base or vice versa, it can be determined using a simple calorimeter consisting of a polythene bottle fitted with a cork having two holes , one for the thermometer and the other for the stirrer. 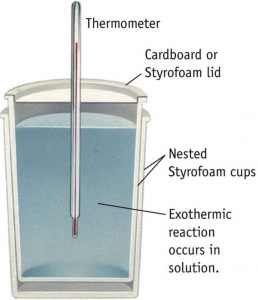 Instead of polythene bottle , a foamed polystyrene cup with a cover is also sometimes used .It is called coffee cup calorimeter.

Taking the example of neutralisation of HCl with NaOH.

2) Both the beakers are kept in water bath till the solution attain the same temperature.

Final temperature of the solution after mixing = t2  ° C

Heat produced by neutralisation of 1000 cc of 1 N HCl

This give the heat of neutralisation per equivalent.

Measurement of ΔH or qp reaction for any reaction

For any reaction occurring in solution, the heat change accompanying the reaction at constant pressure i.e. enthalpy change can be measured by using the calorimeter.

The reaction is allowed to take place in the polythene bottle.

For the measurement of qp or ΔH ,the reaction may be carried out in a vessel with conducting walls.

This vessel may be  placed in an insulated outer vessel containing water and fitted with a stirrer and a thermometer. The Rise or fall in temperature may be recorded and the result calculated.