Heat of reaction or enthalpy of reaction is a term used for the heat changes accompanying any reaction.

The enthalpy of combustion of a substance is defined as the heat change when 1 mole of substance is completely burnt or oxidised in oxygen.

Reaction shows that 890.4KJ of heat is produced when 1 mole of methane is completely burnt.

Hence enthalpy of combustion of methane is 890.4 KJ mol-1

It is represented by  ΔcH°

The standard enthalpy of combustion of butane is represented as:

Calorific values of food and fuels

Fuels like cool ,kerosene oil, gasoline ,diesel oil are burnt to produce energy for the running of machines. Similarly for the working of the human machine, we eat carbohydrates, fats etc in the form of food.

The carbohydrates are first decomposed in our body by the enzyme to form glucose which then undergoes oxidation by the oxygen that we inhale to produce energy.

This oxidation reaction is called combustion of food.

The Calorific value of a fuel or food is the amount of heat in calories or joules produced from the complete combustion of 1 gram of fuel or the food.

A normal person needs about 3000 Kcal per day. The food consisting of Carbohydrates, oils, fats ,vitamins, proteins ,mineral ,salts etc which provide the necessary calories is called a balanced diet.

The enthalpy of formation of a substance is defined as the heat change i.e. heat evolved or absorbed when 1 mole of the substance is formed from its elements under given conditions of temperature and pressure.

It is usually represented by ΔfH.

The condition of temperature and pressure usually chosen as 298 K and 1 bar pressure. This is called standard state.

Standard enthalpy of formation of gaseous CO2  is 393.5 KJ 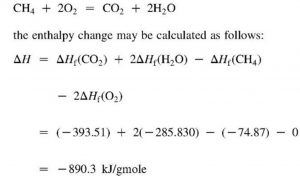 For a general reaction,

The enthalpy of neutralisation of an acid by a base is defined as the heat change when one gram equivalent of the acid is neutralised by a base, the reaction being carried out in dilute aqueous solution.

The enthalpy of neutralisation of any strong acid with a strong base or vice versa, is always the same i.e. 57.1 KJ.This is because the strong acid, strong bases and salts that they form, are all completely ionized in dilute aqueous solution. The reaction between any strong acid and strong base.

The enthalpy of solution of a substance in a particular solvent is defined as the enthalpy change when 1 mole of the substance is dissolved in a specific amount of the solvent.

However, if such a large volume of the solvent is taken that further addition of the solvent does not produce any more heat change, it is called enthalpy of solution at infinite dilution.

Water is usually used as a solvent and the symbol aq is used to represent it at large dilution.

The thermochemical equation for the dissociation of KCL and CuSO4may be represented as:

The first case is endothermic and enthalpy of solution is 18.6 KJ mol-1

Second case is exothermic and enthalpy of solution is – 66.5 KJ mol-1

The salt like copper sulphate ,calcium chloride when present in the hydrated state dissolve with the absorption of heat.

Dissociation of ionic solid into free ions. The energy required for this process is called lattice energy or lattice enthalpy.

Hydration of the ions.The energy released in this process is called hydration energy or enthalpy of hydration.

For 1 mole of NaCl

For most of the ionic compounds, Δsol H  is positive.

Dissolution of most of the salt increases with increase in temperature.

If the lattice enthalpy of a salt is very high, dissolution of compound may not take place at all.

Max born and Fritz Haber in 1919 put forward a method for the calculation of lattice enthalpy and hence for predicting the stability of the ionic compounds formed.

The method is known as Born-Haber cycle. 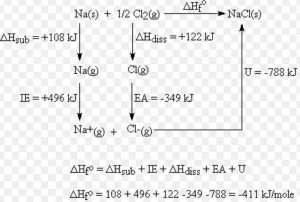 Greater the lattice enthalpy of an ionic compound, less is its solubility in water.

When 1 mole of a given substance dissociates into gaseous atom ,the enthalpy change accompanying the process is called enthalpy of atomisation.

It is represented by the symbol Δa H°

When 1 mole of a covalent compound on dissolution in water splits to produce ions in the solution, the enthalpy change accompanying the process is called in therapy of ionisation.

Enthalpy of formation of ions

The amount of enthalpy change when 1 mole of the anhydrous salt combines with the required number of moles of water so as to change into the hydrated salt, is called the enthalpy of hydration or heat of hydration.

For ex: Enthalpy of hydration of copper sulphate is -78.2 KJ mol-1

The enthalpy change that take place when 1 mole of one form of an allotropic modification changes to another is called is enthalpy of allotropic transformation.