You are here: Home / Class 11 / Chemistry / Structure of Atom / Discovery of Electron

​William crookes in 1879 studied the conduction of electricity through gases at low pressure. 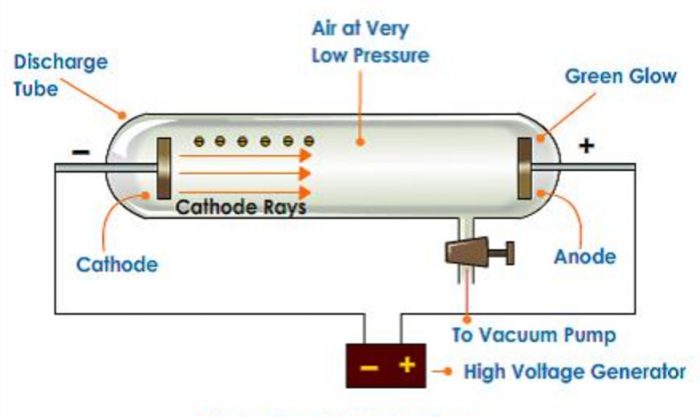 1)He took a discharge tube which is a long glass tube, sealed at both the ends and fitted with two metal electrodes.

2)It has a side tube fitted with a stop cock which can be connected to a vacuum pump to reduce the pressure of the gas inside to any desired value.

When high voltage of about 10000 volts is applied between the electrodes the following results are observed at different pressures :

1 ) When the gas pressure inside is one atmosphere, no current flows between the electrodes.

2)When the pressure is reduced to about 10 millimetre ,the current starts flowing between the electrodes and coloured glow is observed ,the colour depending upon the nature of the gas taken.

3)When the pressure is for the reduced to about 0.01 millimetre ,the glow between the electrodes disappear but the current continuous to flow and if a perforated anode is used, a  faint greenish glow is observed on the glass walls behind the anode. This shows that some invisible rays are emitted from the cathode which passed through the holes of the anode and strike the wall.These rays were called as cathode rays.

1)They produce a sharp Shadow of the solid object placed in their path. This shows that cathode rays travel in straight line.

2)If a light paddle wheel mounted on an axle is placed in their path, the wheel begins to rotate. This shows that cathode rays are made up of material particles.

5)They produce green fluorescence on the glass walls of the discharge tube as well as on certain other fluorescent substances such as zinc sulphide.

6)They possess penetrating effect ie they can easily pass through thin foils of metals.

For determination of the ratio of charge/mass of electrons

The experiment were carried out by J.J. Thomson in 1897. He used different discharge tubes fitted with electrodes of different metals.He placed different gases in the tube. He found every time that the ratio of charge/mass of the electron was the same.

For the determination of the charge on the electron

The charge on the electron was found by R.A. Millikan in 1917 with the help of his Oil Drop experiment.

An electron is that fundamental particles which carries 1 unit negative charge and has a mass nearly equal to 1/1837 th  of that hydrogen atom.