Surface tension is a property of liquid which arises due to the fact that the molecules of the liquid at the surface are in different situation than those in the interior of the liquid.

A molecule lying inside the liquid is surrounded by other molecules and so is attracted equally in all directions. Hence ,the net force of attraction acting on the molecule is zero. 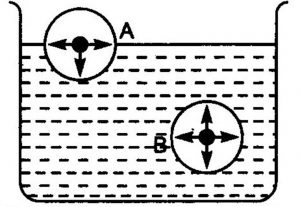 Surface tension of a liquid is defined as the force acting at right angles to the surface along 1 cm length of the surface.

Thus, the units of surface tension are dynes per centimetre or Newton per metre i.e. Nm-1 in the S.I. system.

The drop of a liquid are spherical because for a given volume , a sphere has minimum surface area.

The work in ergs required to be done to increase or extend the surface area by 1 sq cm is called surface energy. The units of surface energy are, therefore , ergs per sq cm or joules per sq m in S.I. system.

Sharp glass edges are heated to make them smooth. This is because on heating ,the glass melts and takes up rounded shape at the edges which has minimum surface area. This is called fire polishing of glass.

3)Rise of a liquid in capillary tube

This rise is due to inward pull of surface tension acting on the surface which pushes the liquid into the capillary tube. It is because of the same reason that oil rises into the Wick of an oil lamp or water below the surface of the earth rises in the plant or ink in a blotting paper.

In case of liquids which do not wet glass ex Mercury ,the level inside the capillary falls below the level outside, whereas the upper surface of a liquid that wets glass is concave ,that of mercury is convex . 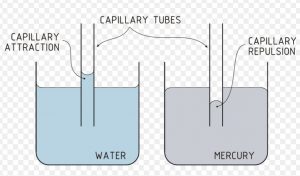 A curved surface of a liquid is known as meniscus.

4)Effect of nature of the liquid on surface tension

5)Effect of temperature on surface tension