A gas which obeys the ideal gas equation, PV =nRT under all conditions of temperature and pressure is called an ideal gas.

There is no gas which obeys the ideal gas equation under all conditions of temperature and pressure.

The gases are found to obey the gas laws if the pressure is low or the temperature is high.Such gases are known as real gases.

It is found that gases which are soluble in water or are easily liquefiable show larger deviation than gases like H2, O2, N2 etc.

If we plot experimental value of pressure versus volume at constant temperature and theoretically calculated values from Boyle’s Law, the two curves do not coincide.

The extent to which a real gas deviates from ideal behaviour can be studied in terms of Compressibility  factor.

a) When Z < 1 , the gas is said to show negative deviation.This implies that the gas is more compressible than expected from ideal behaviour.

This is also attributed to predominance of attractive forces among the molecules of these gases.

b) When Z > 1, the gas is said to show positive deviation.This implies that the gas is less compressible than expected from ideal behaviour.

This is attributed to predominance of strong repulsive forces among the molecules.

Greater the departure in the value of Z from unity, greater are the deviation from ideal behaviour.

At the same temperature and pressure, the extent of deviation depends upon the nature of the gas.

For the same gas, at a particular pressure, the extent of deviation depends upon the temperature.As the temperature increases, the minimum in the curve shifts upwards.A temperature is reached at which the value of Z remains close to 1 over an appreciable range of pressure.

The temperature at which a real gas behaves like an ideal gas over an appreciable pressure range is called Boyle temperature or Boyle point.

At ordinary pressure, Z is very near to 1 i.e. the deviation from ideal behaviour  are so small that the ideal gas laws can be applied. 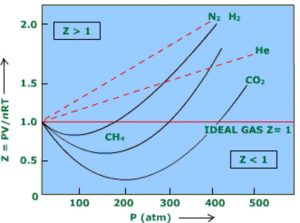 If the gas shows ideal behaviour,

Compressibility factor is the ratio of the actual molar volume of the gas to the calculated molar volume at the same temperature and pressure.

Cause of Deviation form ideal behaviour

At high pressure or low temperature, the following two assumptions of Kinetic theory of gases are faulty:

1)The volume occupies by the gas molecules is negligible as compared to the total volume of the gas.

2)The force of attraction or repulsion between the gas molecules are negligible.

If the pressure is high or the temperature is low, the gas molecules come close together.Hence under these conditions:

1)The forces of attraction or repulsion between the molecules may not be negligible.

J.D. van der waal in 1873 , modified the ideal gas equation by applying correction so as to take into account

1)The volume of the gas molecules

2)The forces of attraction between the gas molecules

Van der waal equation for 1 mole of the gas,

Van der waal equation for n mole of the gas,

where a and b are called van der waal constants.Their value depend upon the nature of gas.

A molecule lying within the vessel is attracted equally by other molecules on all sides but a molecule near the wall is attracted by the molecules inside.Hence it exerts less pressure.Observed pressure is less than the ideal pressure.

Substituting the corrected values of volume and pressure in the ideal gas equation , we get

van der waal constant a: Its value is a measure of the magnitude of the attractive forces among the molecules of the gas.Greater the value of A ,larger are the intermolecular forces of attraction.

At moderate pressure, V decreases.Hence a / V2 increases and cannot be neglected.V is still large enough in comparison to b so tht b can be neglected.Thus , van der waals equation becomes

Compressibility factor is less than 1.As pressure is increased at constant temperature, V decreases so that the factor a/RTV increases.

Exceptional Behaviour of Hydrogen and Helium

For hydrogen and helium, the compressibility  factor  Z is always greater than 1 and increases with increase of pressure.This is because Hydrogen and helium being . very small, the intermolecular forces of attraction in them are negligible i.e. a is very very small so that a/V2 is negligible.