A given substance can be made to exist in any one of the three states under different conditions of temperature and pressure.

The temperature at which all the three phases of the same substance exist together is called triple point.

The change of state is often accompanied by the absorption or evolution of heat.

Difference between Solid, Liquid and Gas

Two more states of matter have been found to exist :

(1) Plasma state which consists of a mixture of electrons and positively charged ions formed due to superheating of the gaseous state.

Example: in the sun or stars.

(2) Fifth state consists of a supercooled liquid in which the atoms lose their individual identity and condensed to form a single super atom.

The forces of attraction existing among the molecules of a substance are called intermolecular forces.

Intermolecular forces, i.e. forces which exist within same molecule or a polyatomic ion ,affect the chemical properties of the substance.

Greater the intermolecular forces, higher is the boiling point.

The intermolecular forces arises due to following interactions:

For Example: In HCl, chlorine being more electronegative acquires a slight negative charge whereas the hydrogen end becomes slightly positively charged. The dipole dipole interactions then take place among the HCl molecules as:

The magnitude of dipole-dipole forces in different polar molecules can be predicted on the basis of polarity of the molecules, which in turn depends upon the electronegativities of the atoms present in the molecule and the geometry of the molecule.

The existence of these forces was studied by keesom in 1912.Hence ,these forces are also called Keesom forces and the effect is called orientation effects. 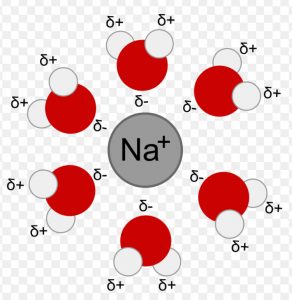 Due to greater charge density on the cation, this interaction is usually stronger with the cation than with the anion having the same charge but bigger size.

CCl4 being non-polar ,cannot interact with Na+ and Cl− ions.Hence NaCl is insoluble in CCl4.

A non-polar molecule may be polarised by the presence of an ion near it, i.e. it becomes an induced dipole. The interaction between them are called ion induced dipole interaction.The strength of these interactions depend upon the charge on the ion and the ease with which the non polar molecules get polarized. A cation polarizes the molecule by attraction of the electron cloud whereas an anion does it by repulsion.

Strength will depend upon the strength of the dipole and the ease of polarizability of the non polar molecules.

These forces were proposed by Fritz London in 1930. Hence they are termed as London forces. These forces arise from the motion of the electron. It is believed that at any instant of time, the electron cloud of the molecule may be distorted so that an instantaneous dipole used is produced in which one part of the molecule is slightly more negative than the rest.

The instantaneous dipole induce dipole in the neighbouring molecule. These are then attracted to each other exactly in the same way as the permanent dipole. The forces of attraction between the induced  dipole are called London dispersion forces.

London forces are the weakest intermolecular forces. Their magnitude depends upon the following factors:

For noble gases ,as we move down the group, the size of the atom increases ,i.e. size of the electron cloud increases which gets more and more distorted. As a result, London forces increase and so do their boiling point.

The overall attraction between molecule is greater in the case of n- pentane because there are more sites of interaction, the molecules are able to come in contact with the entire length of the molecule. In case of neo- pentane there is less contact and hence less force of attraction.

(1) Intermolecular forces are the forces of interaction between the molecules of that substance which try to bring the molecule closer.

(2)Thermal energy possessed by the molecules due to temperature which result into the movement of the molecule and hence tries to keep them apart.

(1) A solid has rigidity because thermal motion is too weak to overpower the strong intermolecular forces of attraction. In a gas, thermal energy is so high that the molecules cannot come close together. Hence there are large empty spaces between them .In liquids there is a balance between the attractive intermolecular forces and thermal energy. Hence, molecule in a liquid exist together, i.e. it is a condensed state of matter but there is no rigidity.

(2) A solid melts on heating because on heating, the thermal motion increases.

(3) In both liquid and solid, their molecules exist together ,i.e. both of them are condensed States of matter having sufficiently strong intermolecular forces of attraction. Hence they exhibit very low compressibility. In gases, there are large empty spaces between the molecules therefore they possess high compressibility.

Melting point is the temperature at which a solid melts to form a liquid.

Boiling point is the temperature at which a liquid changes into vapour.

In covalent compound, the force of attraction among the molecules are weak van der waals forces. They have low melting and boiling point.