You are here: Home / Class 11 / Chemistry / Some Basic Concepts of Chemistry / Classification of Matter

​Matter is defined as anything that occupies space and possesses mass.

Vapours represent a gaseous state of a substance which is liquid at room temperature.

A substance which is in gaseous state at room temperature is called a gas.

For Ex: Ammonia is a gas but on heating water forms vapours.

All kinds of matter are classified into two types:

A material is said to be heterogeneous if it consists of a number of phases. The different phases are separated from each other by distinct boundaries. 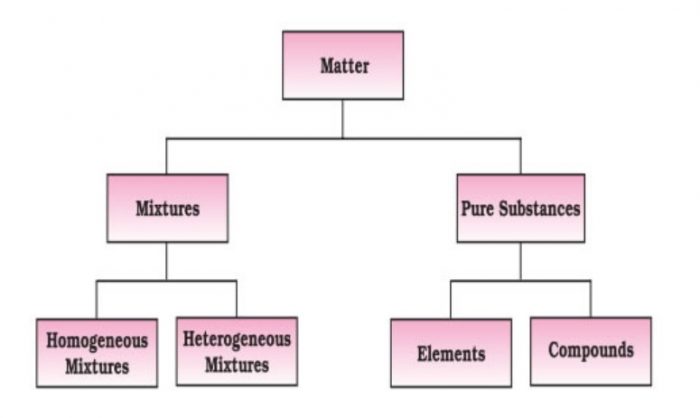 A pure substance is one which is made up of only one kind of particles (atoms or molecules).

Pure substance are of two types:

A mixture is one which contains two or more different kinds of particles(atoms or molecules).

Mixtures are of two types:

An element is usually defined as the simplest form of a pure substance with definite physical and chemical properties and which can neither be broken into nor built from simpler substances by any chemical or physical method.

An element contains only one kind of particles. These particles may be atoms or molecules.

The number of elements known to date is 114 .out of these 92 occur in nature in the earth crust and the remaining have been prepared artificially in the laboratory through reactions.

The elements whose properties are intermediate between those of metals and non-metals are known as metalloids.

Compounds are pure substances containing more than one kind of element or atom.

For example : Water is a compound containing hydrogen and oxygen combined together in a fixed proportion of 1:8 by weight.

All the compounds may be divided into two categories :

Organic Compounds are the compounds containing carbon and few other elements like carbon, Hydrogen, oxygen, nitrogen, sulphur, halogens. They were originally obtained only from plants and animals.

Inorganic Compounds are the compounds containing any two or more elements out of more than one 114 elements known.

Difference between Mixture and Compound

An atom is the smallest particle of an element which may or may not be capable of independent existence.

A molecule is the smallest particle of an element or a compound which can exist freely.

Molecules may be classified into two categories:

(1) Molecules of elements: They are made up of only one kind of atom, they are called homoatomic or homonuclear molecules.

The atomicity of metal elements like sodium, magnesium, aluminum, copper, iron etc. is taken as 1. They are called as Monoatomic molecules.

(2) Hydrogen, Nitrogen, Oxygen, Chlorine, bromine etc. have two atoms in their molecules. So the atomicity is 2.They are called as diatomic molecules.

(3) Ozone has 3 atoms in its molecules, so the atomicity is 3.They are called as triatomic molecules.

(4) Phosphorus has 4 atoms in its molecules, so the atomicity is 4.they are called as tetra-atomic molecules.

Molecules of compounds :They are made up of atoms of different elements and hence are called heteroatomic or heteronuclear molecules.

They may be diatomic, triatomic depending upon the number of atoms present in a molecule of the compound .