The group 13 of the periodic table consists of the elements Boron, aluminium, gallium indium, thallium and the newly discovered elements ununtrium(uut).

Its abundance in the earth’s crust is very low. Boron mainly occur as:

Aluminium is the third most abundant element by weight found in the earth crust after Oxygen and silicon.

The important minerals of aluminium are:

Gallium, indium and thallium are the less abundant than aluminium.

The general valence shell electronic configuration of elements of group 13 is ns1 np1 where n=2-7. 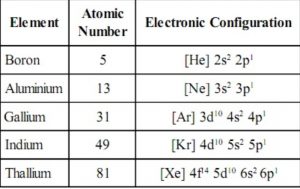 The atomic and ionic radii of group 13 elements are smaller than those of the corresponding elements of group 2.

On moving down the group, both atomic and ionic radii are expected to increase primarily due to addition of a new electron shell with each succeeding element. However, there are some deviations as we move from aluminium to gallium.

Reason  : This is due to the filling of electrons in d orbital. In between Al and Ga, there are 10 elements of the first transition series which have electrons in the inner d orbital. As the d orbitals are large in size, these intervening electrons do not shield the nucleus effectively. Effective nuclear charge of Ga is greater in magnitude than that of Al. As a result, the electrons in Ga experience greater force of attraction by the nucleus than in Al and hence atomic radius of the Ga is slightly less than that of Al.

Reason : Elements of group 13 have 3 valence electrons in the valence shell; two of these are present in the s- orbital and one in the p-orbital. For the first ionisation enthalpy, the electron has to be removed from the p- orbitals in case of group 13 elements whereas in case of alkaline earth metals the s-electron of the same principal shell has to be removed. Since an s-electron is nearer the nucleus, it is more strongly attracted than the p-electron of the same principal shell. Hence, the removal of p-electron is much easier than the s-electron and therefore, the first ionization enthalpies of the elements of group 13 are lower as compared to the corresponding values of the alkaline earth metals of group 2.

On moving down the group 13 from Boron to aluminium, there is a sharp decrease in first ionization enthalpies of aluminium due to an increase in atomic size and screening effect which outweigh the effect of increased nuclear charge.

First ionisation enthalpy of gallium is only slightly higher than that of aluminium while that of Tl is much higher than those of Al, Ga and In.

Reason: Al follows immediately after s-block elements while Ga and In follow after d-block elements and thallium after d and f block elements. These d and f electrons do not shield the valence electrons from the nucleus very effectively than s and p- electrons. As a result, the valence electrons remain fairly tightly held by the nucleus and hence larger amount of energy is needed for their removal. Now as we move from Al to Ga, due to poor shielding of the nucleus by 3d electrons, the effective nuclear charge acting on gallium is slightly higher than that of aluminium. As a result, first ionisation enthalpy of gallium is slightly higher than that of aluminium. On moving down the group from gallium although the nuclear charge increases by 18 units but the total shielding effect of 3d and 4d electrons outweighs the effect of increased nuclear charge and hence first ionization enthalpy of In is lower than that of gallium.

Reason: Amongst the elements of group 13, Boron has the highest sum of first three ionization enthalpies i.e. ΔiH1+ΔiH2 +ΔiH3. As a result, it has little tendency to lose electrons and hence is least electropositive among group 13 elements. It is a non-metal and a poor conductor of electricity. As we move from Boron to aluminium, the sum of ΔiH1+ΔiH2 +ΔiH3 decreases due to increase in atomic size and hence aluminium has a high tendency to lose electrons.Al is highly electropositive. Therefore, Aluminium is a metal and a good conductor of electronegativity.

The melting point of group 13 elements do not show a regular trend. This is probably due to unusual crystal structure of Boron and gallium. The melting point decreases sharply on moving down the group from B to Ga and then increase from Ga to Tl. Amongst the elements of group 13, gallium has the lowest melting point and could exist as a liquid at room temperature in summers.

Boron has high melting point because its crystal structure consists of icosahedral units with boron atoms at all the 12 corners and each Boron atom is bonded to 5 equidistant neighbours. The crystal structure of gallium is quite different from that of boron. Each gallium metal atom has one close neighbour at a distance of 243pm and 6 more distant neighbours at a distance of and 279 pm270 pm. Ga consist of almost discrete diatomic molecule and hence its melting point is low.

Al, In and Tl have closed packed structure. Their melting point decreases from Al to In and increases again for Tl.

On moving down the group, the densities increases. This is due to increase in the atomic mass of the element which outweighs the effect of increased atomic size. The densities of boron and Aluminium are quite lower than those of other members.