The binary compounds of boron with hydrogen are called Boron hydrides.

1) By reduction of boron trifluoride etherate with Lithium aluminium hydride in diethyl ether.

2) Diborane is prepared in the laboratory by the oxidation of sodium borohydride with iodine in diglyme as solvent.

3) On the industrial scale, diborane is obtained by the reduction of BF3 with sodium hydride.

Diborane is stable only at low temperature. When diborane is heated in a sealed tube,  between 373- 533 K, a complex reaction occurs and various higher boranes are formed.

By careful control of temperature ,pressure and reaction time , different individual boranes can be obtained.

It catches fire spontaneously upon exposure to air. It burns in oxygen evolving an enormous amount of heat.

Boranes are readily hydrolysed by water to form boric acid.

With methanol ,trimethylborate is formed.

Diborane combines with ammonia to form an addition product, B2H6.2NH3 formulated as [BH2(NH3)2]+ [BH4]‾ , which when heated to 473 K decompose to give a volatile compound called borazine or borazole.

Borazine is isoelectronic and isosteric with benzene and its structure is similar to that of benzene expect that in benzene the π-electrons are completely delocalised but in borazine, they are only partially delocalized.

Because of its similarity with benzene , borazine is also called inorganic benzene.

Several metal hydrides react with diborane to from tetrahydridoborates known as borohydride. All these contain the tetrahedral [BH4]‾ ion.

Thus HI react at about 323 K in absence of catalyst while HBr and HCl reacts in presence of their aluminium halide as catalyst.

Halogens also react with diborane to form the corresponding halodiboranes.

1) Dibornae is used for preparing a number of boron hydrides such as LiBH4 , NaBH4 .

2) It is used as a reducing agent in organic reactions.

3)It is used as a fuel for supersonic rockets.

There are two types of hydrogen atom :

1) The four hydrogen atoms (two on left and two on right shown by thick lines) are called terminal hydrogens.

These four terminal hydrogens and the two boron atoms lie in the same plane while the remaining two hydrogen atoms- one lying above and one lying below this plane form bridges and hence are called which bridged hydrogen.

bana are two types of bonds in B2H6 molecules.

1) The four terminal B-H bonds are normal covalent bonds and hence are quite strong. Each bond is formed by sharing a pair of electron between B and H and hence are also called two centre electron pair bonds or two centre two electron bond(2c-2e)

2) The two bridge bonds i.e. B—–H—–B are quite different from normal covalent bonds. Each bridge hydrogen is bonded to two boron atoms by a pair of of electrons. These are three centre electron pair bonds or three centre 2 electron bonds and hence are quiet weak.

Because of their semblance to a banana, these three centre electron pair bonds are also called banana Bond.

Structure of diborane on the basis of hybridization 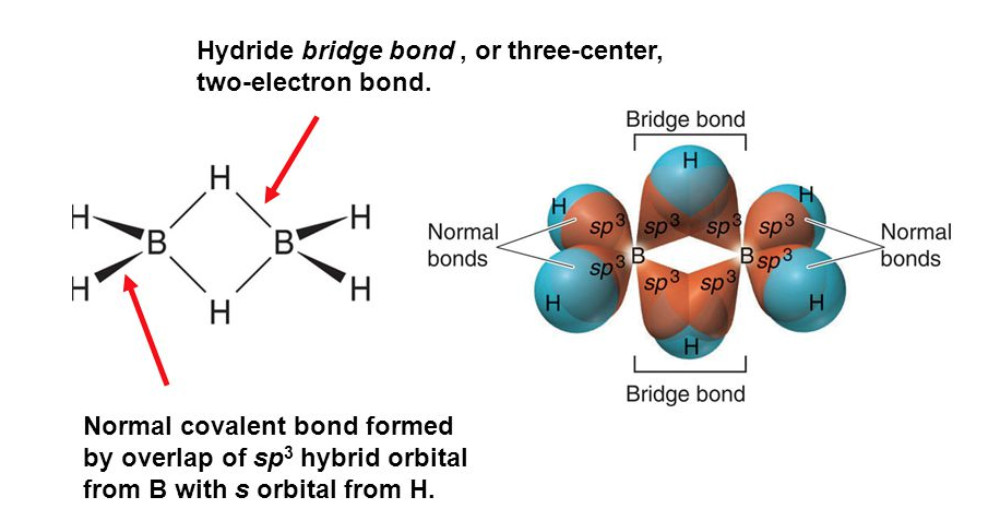 Because of the shape of the electron cloud formed, it is called banana bond. Molecules like B2H6 which do not have sufficient number of electrons to form normal covalent bonds are called electron deficient molecules.