4 allotropes of carbon having well defined crystal structure are:

It can also be prepared artificially but because of the high cost and poor quality, diamonds are seldom made artifically. 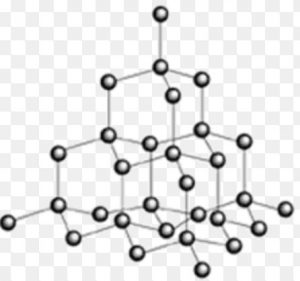 1) Purity: Diamond is the purest form of carbon.

3) Hardness : Since diamond exists as a three- dimensional network solid, it is the hardest substance known with high density and melting point.

4) Conductivity : Since all the electrons are firmly held in C-C, σ bonds, there are no free electrons in a diamond crystal. Therefore diamond is a bad conductor of electricity. It has the highest thermal conductivity.

5) Transparency: Because of high refractive index, diamond can reflect and refract light. It is therefore, a transparent substance.

1) It is used for cutting glass, making borers for rock drilling and for making abrasives.

2) When diamond is cut and polished, brilliant light is refracted from its surfaces. That is why diamond is used for making precious gems and jewellery.

3) It is used for grinding and polishing of hard material.

4) It is also used for making dies for drawing thin wires from metals.

It occurs in nature and can also be manufactured artificially by heating coke to 3273-3300 K in an electric furnace. 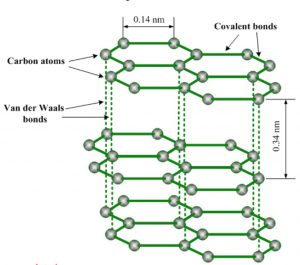 1) In graphite, carbon is sp2 hybridised. Each carbon is linked to three other carbon atoms forming hexagonal rings.

2) Graphite has a two-dimensional sheet like structure consisting of a number of benzene rings fused together.

3) The various sheets or layers are held together by weak van der waals forces of attraction. The distance between any two successive layers is 3.40 A.

1) Purity : Graphite is also the purest form of carbon.

3) Softness : Since any 2 successive layers are held together by weak forces of attractive, one layer can slip over the other.This makes graphite soft and a good lubricating agent.

4) Conductivity: Since only three electrons of each carbon are used in making hexagonal rings in graphite, fourth valence electron of each carbon is free to move. This makes graphite a good conductor of heat and electricity.

Its thermal conductivity is lower than that of diamond. Thermal conduction is due to transfer of thermal vibrations from one atom to the other which is easier in a compact crystal of diamond than in layered structure of graphite.

Graphite is a black substance and possesses a metallic lustre.

1) It is used as a reducing agent in steel manufacturing.

2) It is also used in high-strength composite material.

3) It is used for making electrodes for dry cell.

4) It marks paper black and is therefore called black lead. It is used for making cores of lead pencils.

5) It is used in the manufacture of crucibles which can withstand high temperature.

6) It is also used as a moderator for fast moving neutrons in atomic reactors.

7) It is used as a solid lubricant for heavy machinery.

In 1985, a third crystalline allotrope of carbon called fullerenes was discovered.

2) By heating of graphite in an electric arc in an inert gas such as helium or argon when a sooty material is formed by the condensation of Cn small molecules. The sooty material so formed mainly consist of C60 fullerene with smaller quantity of C70 and traces of other fullerenes. The C60 and C70 fullerenes can be readily separated from the fullerene soot by extraction with benzene or toluene followed by chromatography over alumina.

2) A solution of C60 fullerene in toluene is purple whereas that of C70 fullerene is orange red.

3) Fullerenes are the only pure of carbon because they do not have dangling edge or surface bonds which attract other atoms as in case of graphite or diamond. 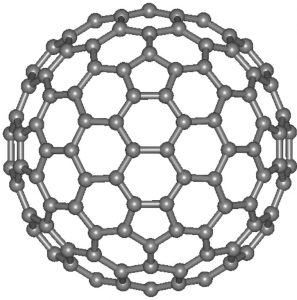 1) C60 allotrope is most stable. It looks like a soccer ball and is called as bucky ball.

3) All the carbon atom are equal and they undergo sp2- hybridisation.Each carbon atom forms three σ  bonds with other three carbon atoms.The remaining electrons of each carbon is delocalized in molecular orbitals  which, in turn, give aromatic character to the molecule.

4) Soccer ball shaped molecule has 60 vertices with a carbon atom at each vertex.It contains both single and double bonds with carbon-carbon distance of 145.3 and 138.3 pm.

1) Fullerenes being covalent are soluble in organic solvents.

2) They can be reduced electrochemically and react with group 1 alkali metals.This compound behave as a superconductor below 18 K which means that it carries electric current with zero resistance.

3) It reacts with OsO4 which adds across one of the double bonds in the cage.

a) Wood charcoal: It is obtained by strong heating of wood in a limited supply of air.

b) Animal charcoal: It is also known as bone black and is obtained by destructive distillation  of bones.

c) Sugar charcoal: It is the purest form of amorphous carbon and is obtained by the action of conc H2SO4 on sucrose or cane sugar.

d) Activated charcoal: All forms of charcoal are highly porous substance and can adsorb many times their own volume of gases.Their adsorption capacity can be further increased by heating charcoal at 1273 K in a current of super heated steam.This treatment removes the impurities sticking on the surface and thus blocking the capillary pores.Charcoal thus prepared is called activated charcoal.

It contains 98-99% carbon. It is obtained when hydrocarbons rich in carbon such as kerosene oil, petroleum, turpentine oil, acetylene are burnt in limited supply of air.

The soot obtained is made to stick on wet blankets hung in a chamber. After drying, the soot is removed from the blankets. The soot thus collected is called the lamp black or carbon black.

1) Graphite fibre reinforced plastics are prepared by reinforcing or embedding graphite fibres into a light weight matrix such as epoxy resins, polyester resin. These are light weight composites and are used for making superior sports goods.

2) Graphite is used for making electrodes for batteries and industrial electrolysis.t is used as a lubricant in heavy industry.

3) It is also used as a moderator for gas cooled nuclear reactors where it slow down the fast moving neutrons.

4) Being highly porous, activated charcoal is used for absorbing  poisonous gases in gas masks, in water filters to remove organic contaminators and in air- conditioning system to control odour.

5) Carbon black is used as a reducing agent in metallurgy and also as a fuel.

6) Coke is used as a reducing agent in metallurgy and also as a fuel.

7) Diamond is a precious stone and is used in jewellery. It is used for making drills or as an abrasive for cutting and polishing.