Quantitative analysis means to determine the percentage of each element.

Estimation of Carbon and Hydrogen

The apparatus used for estimation of carbon and hydrogen

Liebeg’s method is suitable in case of organic compounds containing C. H and O only. If, however, the organic compound contains one or moreof the elements like N. S and halogens also, the method is modified as under

(1) Substances containing nitrogen: Under the conditions of combustion, nitrogen, if present, in the organic compound is oxidised to oxides of nitrogen (NO, NO2) which are also absorbed in KOH solution. In such cases, a reduced copper gauze is placed near the exit end of the tube which reduces oxides of nitrogen back to N2 gas

(2) Substances containing halogens: Halogens, if present, in the organic compound are converted into cupric halides which themselves decompose to form free halogens. These halogens and volatile cupric halides also get dissolved in KOH solution. In such cases, a roll of bright silver gauze is placed near the exit end of the combustion tube. Silver gauze decomposes, volatile cupric halides forming non-volatile silver halides. Halogens also combine with silver giving silver halides.

Besides, S and halogens, PbCrO4 , is also useful for phosphorus containing compounds. This is because oxides of phosphorus produced during combustion also react with lead chromate to form non-volatile lead phosphate.

Methods used for estimation of Nitrogen

The two most commonly used methods for the estimation of nitrogen in an organic compound are:

This method is applicable to all organic compounds containing nitrogen.

Principle: A known mass of the organic substance is heated with excess of copper oxide in an atmosphere of CO2. Carbon, hydrogen and sulphur (f present) are oxidised to CO2, H2O and SO2 respectively while nitrogen gas is set free. Any oxide of nitrogen that may be formed is reduced back to free nitrogen by passing over a hot reduced copper gauze.

The nitrogen thus formed is collected over conc. KOH solution which absorbs all other gases i.e.  CO2 , H2O vapours, SO2 etc. The volume of nitrogen collected is thus noted and from this the percentage of nitrogen can be calculated.

Apparatus. The apparatus used for estimation of nitrogen by Duma’s method is 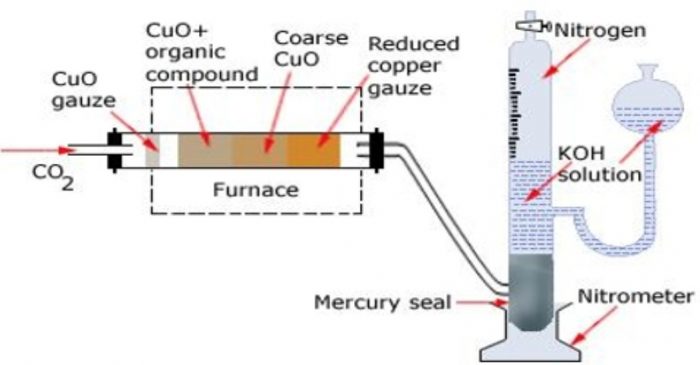 It consists of three parts :

(b) combustion tube and

CO2 needed for the purpose is produced by heating sodium bicarbonate or magnesium carbonate.The gas is perfectly dried by bubbling through conc H2SO4 before passing it through the combustion tube.

It is a hard glass test tube about 90 cm long and about 2 cm in diameter. It is packed with

(2) An accurately weighed quantity of the substance mixed with excess of cupric oxide.

(4) A reduced copper gauze which helps to reduce any oxides of nitrogen formed during combustion back to nitrogen gas.

It consists of a long graduated tube having a reservoir and a tap at the upper end. It contains about 40% KOH solution. It also has a mercury seal at the bottom which prevent KOH solution from being sucked back into the combustion tube.

Both CO2 and H20 produced during combustion are absorbed by KOH solution white N2, is collected over it.The volume of N2 is measured after careful levelling (by making the level of KOH in the nitrometer tube and reservoir the same)

The apparatus used for the estimation of nitrogen by Kjeldahl’s method. 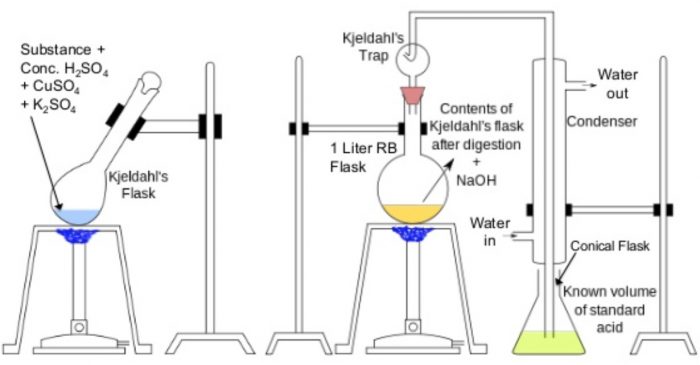 Principle: A known mass of the organic compound is heated with conc. H2SO4, in presence
of potassium sulphate and a little copper sulphate or mercury in a long-necked flask called Kjeldahl’s flask. Potassium sulphate raises the boiling point of H2SO4, and thus ensures complete reaction while copper sulphate or mercury catalyses the reaction.
As a result of heating, the nitrogen present in the organic compound is quantitatively converted into ammonium sulphate. Ammonium sulphate thus obtained is boiled with excess of NaOH solution to liberate ammonia gas which is then absorbed in a known excess of a standard acid such as H2SO4, or HCl.

The volume of the acid left unused is found by titration against a standard alkali solution.

From this, the volume of the acid used up (or the volume of ammonia evolved) and hence the percentage of nitrogen in the organic compound can be calculated.

In general, % age of Nitrogen

Mass of the substance taken

If the acid used is monobasic (i.e. basicity 1), the above equation reduces to

Mass of the substance taken

Principle: A known mass of the organic substance is heated with fuming nitric acid and a few crystals of silver nitrate in a sealed hard glass tube (about 2 cm wide 50 cm long) called Carius tube in a furnace. 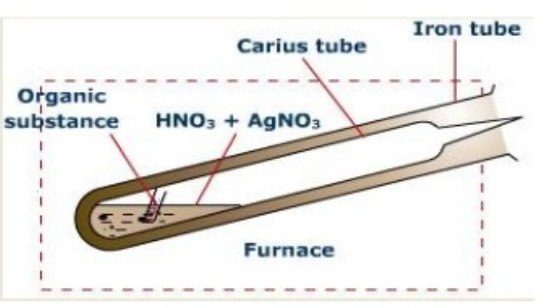 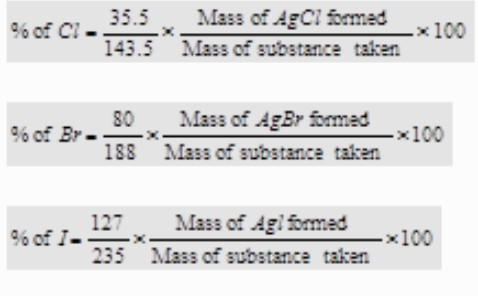 Principle: A known mass of the substance is heated with sodium peroxide or fuming nitric acid in a sealed tube (Carius tube). Carbon and hydrogen are oxidised to CO2 and H2O respectively while sulphur present in the compound is oxidised to sulphuric acid which is then precipitated as barium sulphate by adding excess of barium chloride solution.

The ppt. of BaSO4 is filtered, washed, dried and weighed. Knowing the mass of substance taken and the mass of BaSO4 ppt. formed, the percentage of sulphur can be calculated.

Principle: A known mass of the organic compound is heated with fuming nitric acid in a sealed tube (Carius tube). Under these conditions, carbon and hydrogen are oxidised to CO2 and H2O respectively while phosphorus present in the organic compound is oxidised to phosphoric acid which is precipitated as ammonium phosphomolybdate by heating it with conc. HNO3 and then adding ammonium molybdate.

The precipitates of magnesium ammonium phosphate are filtered, washed, dried and then ignited.

Alternatively if phosphorus is estimated as Mg2P2O7.

This is the mass of phosphorus present in w g of the compound.