A free radical may be defined as an atom or a group having an odd or unpaired electron.These are generally produced by homolytic cleavage of a covalent bond.

Free radicals are also classified as primary (1°) , secondary (2°) and tertiary (3°) according as the carbon carrying the unpaired electron is primary, secondary and tertiary.

The order of stability of free radicals is the same as that of carbocations i.e. 3° >2° >1°

This order of stability can be explained on the basis of hyperconjugation.

Greater the number of alkyl groups attached to the carbon atom carrying the odd electrons, greater is the delocalization of the odd electrons and hence more stable is the alkyl free radical.

Allyl and benzyl free radicals are stabilized by resonance.

Greater the number of phenyl groups more stable is the free radical.

Free radicals are also very short-lived highly reactive chemical species because of the strong tendency of the carbon atom carrying the odd electron to acquire one more electron to complete its octet. 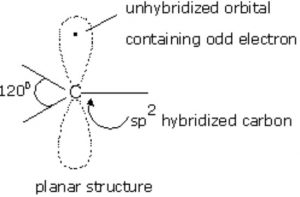