Chemical species bearing a positive charge on carbon and carrying six electrons in its valence shell are called carbocation.

These are formed by heterolytic cleavage of the covalent bonds in which the leaving group takes away with it the shared pair of electrons.

Carbocation are also formed during dehydration of alcohols in presence of conc. H2SO4 at 430-440 K.

Carbocation are classified as primary (1°), secondary (2°) and tertiary (3°) according as the positive charge is present on a primary, secondary and tertiary carbon atom.

Stability decreases as +I effect of the alkyl group decreases.

Carbocations in which the positively charged carbon atom is attached to a double bond or a benzene ring are stabilized by resonance.

More the number of phenyl groups, greater is the stability

tert-Butyl carbocation has 9 α-hydrogens and hence nine hyperconjugation structures can be written for it:

For isopropyl carbocation, six hyperconjugation structures can be written as : 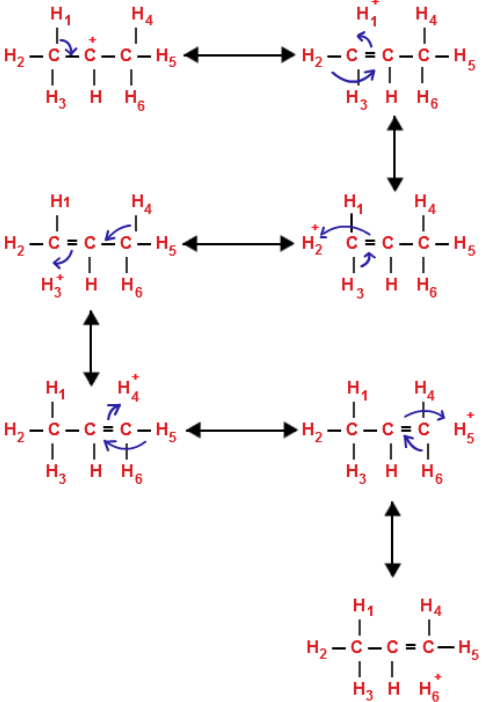 Three hyperconjugation structures can be written for ethyl carbocation: 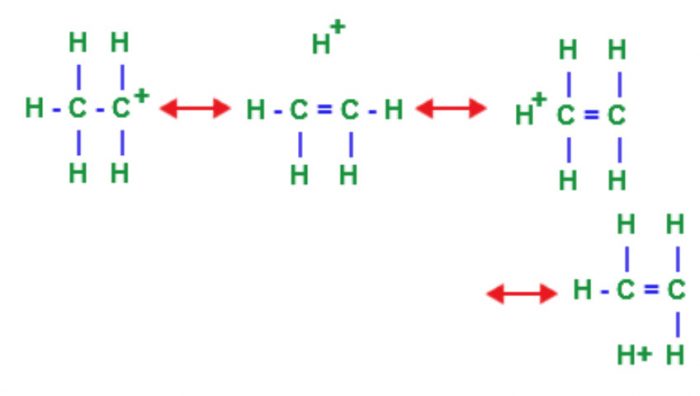 For CH3+ carbocation, no hyperconjugation occurs.

Carbocations are highly reactive chemical species since the carbon atom carrying the positive charge has only six electrons in its valence shell and thus has a strong tendency to complete its octet.

The order of reactivity of any chemical species is reverse that of its stability.

The order of reactivity of carbocations follows the sequence : 1° > 2°>3° 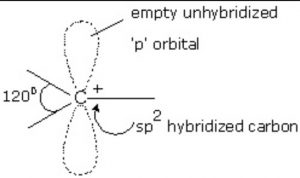 The carbocation are planar chemical species.

The carbon atom carrying the positive charge is sp2 hybridized.

The three sp2– hybridized orbitals of this carbon form three σ-bonds with monovalent atoms or groups which lie in a plane and are inclined to one another at an angle of 120°.

The unhybridized 2p-orbital which is perpendicular to the plane of the three σ-bonds is however empty.