Classical concept of acids and bases

2) reacts with active metals like zinc ,magnesium to give hydrogen

5) whose acidic properties disappear on reaction with a base

Base is a substance whose aqueous solution possessed the following characteristic properties:

2) has a bitter taste

3) has a soapy touch

4) whose basic properties are destroyed on reaction with an acid

Arrhenius  concept of acids and bases

When an electrolyte is dissolved in water ,it dissociates into positively and negatively charged ions.

Such acids are called strong acids.

Substance like acetic acid ,carbonic acid, phosphoric acid when dissolved in water dissociate into ions to a small extent.

Such acids are called weak acids.

A base is defined as a substance which contain hydroxyl group, when dissolved in water gives hydroxide ion (OH‾).

Substances like NaOH and KOH containing hydroxyl group when dissolved into water, dissociate completely to give OH‾ ions as:

These are called strong bases.

These are called weak bases.

Existence of H+ ion and OH‾ ion in aqueous solution

H+ ion is simply a proton which is very small in size. It has a strong electric field. It takes up a lone pair of electrons from water molecule to form called hydronium ion, H3O+.This ion in aqueous solution can combine with more of water molecules to form species like H5O2+ , H7O3+ etc.

OH‾ ion in aqueous solution can be can combine with one or more water molecules to form species like H3O2‾ , H5O3‾ etc.

The dissociation of an acid in water may be expressed as :

The dissociation of base may be expressed as :

When an acid and base are mixed together, they react to form salt and water. The reaction is called neutralization.

Neutralization is defined as the process in which hydrogen ions given by the acid and hydroxyl Ion given by the base combine to form unionized molecules of water.

2) Inability to explain acidic and basic character of certain substances

3)Inability to explain the reaction between an acid and base in the absence of water.

Bronsted and lowry in 1923 proposed concept of acids and bases.

An acid is a proton donor whereas base is a Proton acceptor.

1) HCl and CH3COOH are acids because they donate a proton to H2O.

2) NH3 and CO32‾  are bases because they accept a proton from water.

3)Not only molecules but even the ions can act as acids or bases.

4)Water is accepting a proton and hence is base.

Water is donating a proton and hence is acting as  acid.

Water acts both as an acid as well as base and hence is called amphoteric.

5) Bronsted – lowry definition of acid and bases are not restricted to aqueous solution. HCl is acid because it gives a protons and NH3 is a base because it accepts the proton.

6) The presence of hydroxyl group is not essential for a substance to act as a base. The only requirement is that it should have tendency to accept a proton.

7) A substance acts as an acid i.e. gives a proton only when another substance to accept the proton i.e. a base is present.

8) The reverse reaction are also acid – base reaction. 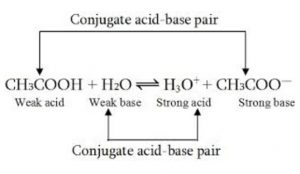 1) Bronsted-lowry concept is not limited to molecules but includes even the ionic species to act as acids or bases.

2) It can explain the basic character of the substances like Na2CO3 , NH3 etc on the basis that they are proton acceptor.

3) It can explain the acid base reaction in the non aqueous medium or even in the absence of solvent.

1) It cannot explain the reaction between acidic oxides like CO2 , SO2 , SO3 and the basic oxides like CaO, BaO, MgO which takes place even in the absence of solvent.

2) Substances like BF3 , AlCl3 etc do not have any hydrogen and hence cannot give a proton but are known to behave as Lewis acid.

Lewis concept of acids and bases

The reaction between an acid and base amount to the formation of a co-ordinate Bond or dative bond between them:

1) Reaction between BF3 and NH3

Lewis bases can be of two types:

1) Neutral molecules like NH3 , R-NH2 , R-OH, H-O-H etc. in which one of the atoms has got at least one lone pair of electrons.

Lewis acids can be of 4 types:

1) Molecules having a central atom with incomplete octet.

These ions can accept pairs of electrons and hence are Lewis acids.

The central atoms in these molecules can expand their outer octet by taking up electrons in the empty d orbitals.

For Ex: CO2 contain  double bonds between carbon and oxygen. Since oxygen is more electronegative than carbon, therefore carbon acquires a slight positive charge and thus can accept a pair of electrons. Hence CO2 acts as Lewis acid.

1) It could explain even those acids and base reactions which could not be explained by others concepts.

1) Lewis concept is so general that it considers every reaction forming a co-ordinate bond to be acid base reaction. This however, may not be always true.

2) The requirement in Lewis concept is the formation of a co-ordinate bond between the acid and base. However acids like HCl and H2SO4 do not form any co-ordinate Bond and therefore should not be acids according to this concept.

3) Acid – base reactions are usually fast but formation of co-ordinate compound is slow. Hence it does not fit in the acid base concept.

4) The catalytic activity of an acid is due to H+ ion.Since the presence of hydrogen is not an essential requirement for a Lewis acid, many Lewis acids will not have this property.

5) Lewis concept cannot explain the strength of acids and bases.