Periodic table may be defined as the table which classified all the known elements in accordance with their properties in such a way that elements with similar properties are grouped together in the same vertical column and dissimilar elements are separated from one another.

The first attempt towards the classification of elements was made by Johann Wolfgang Doebereiner, a German chemist in 1817.

He arranged similar elements in groups of three and showed that their atomic weights were either nearly the same or the atomic weight of the middle element was approximately the arithmetic mean of the other two. These group of three elements were called Doebereiner’s Triads and this generalisation was called Law of triads.

The concept of triads could be applied only to a limited number of elements.

In1865 ,an English chemist, John Alexander Newlands’s observed at that:

When the lighter elements were arranged in order of their increasing atomic weights ,the properties of every 8th elements were similar to those of first one like the eighth note of a musical scale.This is called as Newlands’s law of octaves.

1) It was applicable to only lighter elements having atomic weights up to 40 u.

2) With the discovery of noble gases, the properties of the 8th element were no longer similar to those of the first one. 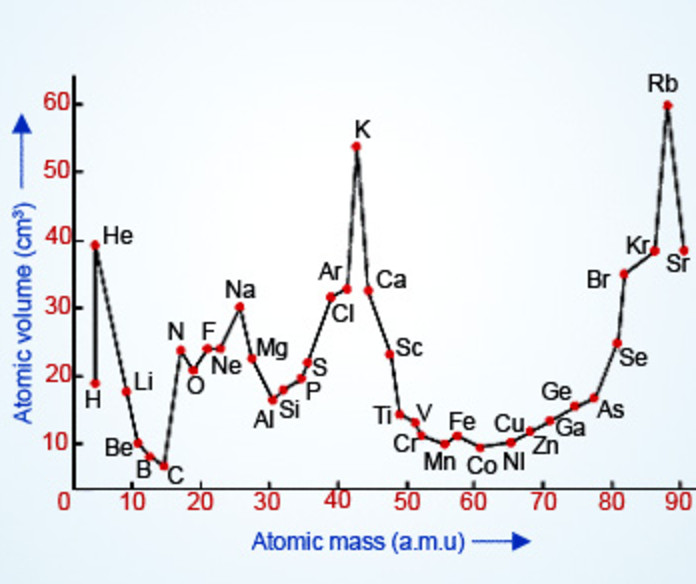 In 1869, Lothar Meyer ,a German chemist, studied the physical properties of various element.

He Plotted a graph between the atomic volume and atomic weights of the elements and observed that the elements with similar properties occupied similar position on the curve.

1) The most strongly electropositive alkali metal occupy the peaks on the curve.

3) The most electronegative elements i.e. halogens occupy the ascending position on the curve.

Lothar Meyer proposed that the physical properties of the elements are a periodic function of the atomic weights.

He arranged the elements in the tabular form in order of their increasing atomic weights.