You are here: Home / Class 11 / Chemistry / Classification of Elements and Periodicity in Properties / Electronic configuration Of Elements

(1) The names are derived directly from the atomic numbers using numerical root for 0 and numbers from 1-9 and adding the suffix ium. The roots for the numbers 0-9 are:

(3) The symbol of the element is then obtained from the first letters of the roots of numbers which make up the atomic number of the element. 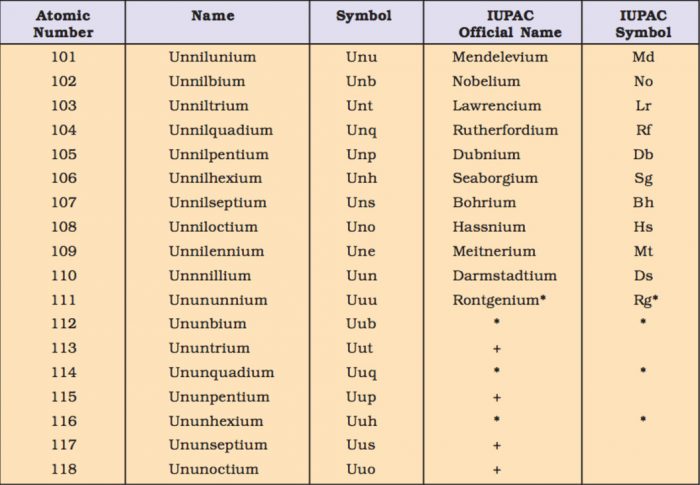 An electron in an atom is characterised by a set of four Quantum numbers( n, l, m and s) and the Principal quantum number (n)  defines the main energy level known as the shell.

Location of any element in the periodic table tells us the quantum number( n and l) of the last orbital filled.

Electronic configuration of elements in period

Each period in the periodic table indicates the value of n for the outermost or the valence shell. The total number of elements in each period is twice the number of orbitals available in the energy level that is being filled.

(2) The second period corresponds to the filling of electrons in the second energy shell (L shell) i.e. n=2.This shell has 4 orbitals( one 2s and three 2p) which can accommodate 8 electrons, therefore second period contains 8 electron. It starts with Lithium (Z=3) and ends at neon (Z= 10).

(3) The third period corresponds to the filling of electron in the third shells, i.e. n=3.This shell has 9 orbitals ( one 3s, three 3p and five 3d) .3d orbital have even higher energy than 4s orbital. Therefore 3d orbitals are filled only after filling of 4s orbital. Third period involves the filling  of only 4 orbitals( one 3s and three 3p) and thus contains 8 elements. It starts with sodium(Z=11) and ends at argon (Z= 18).

(4) The Fourth period corresponds to the filling of electrons in the fourth energy level, n=4. It starts with potassium( Z=19) and ends at calcium (Z= 20).

The filling of 4p orbital begins at gallium( Z=31)and ends at krypton( Z=36) which has the outer electronic configuration as 4s2  3d10 4p6 .In the 4th period, the filling of only 9 orbitals( one 4s, five 3d and three 4p ) occurs which can accommodate at the maximum 18 electrons. Therefore 4th period contain 18 electrons from potassium to Krypton.

(5) The fifth period also contains 18 elements since only 9 orbitals ( one 5s, five 4d and three 5p ) are available for filling with electrons. It begins with rubidium(Z= 37) in which one electron enters 5s orbital. After the filling of 5s orbital, the filling of 4d orbital starts at yittrium (Z=39) and ends at cadmium (Z= 48).These ten elements constitute 4d transition series. Filling of 5p orbitals starts at indium (Z= 49) and ends at xenon ( Z=54).

(6) The sixth period corresponds to the filling of 6th energy level i.e. n= 6.Only 16 orbitals( one 5s, five 4d and three 5p) are available for filling with electrons, therefore 6th period contains 32 elements. It begins with caesium(Z=55) in which one electron enters the 6s orbital and ends up with radon(Z=86) in which the filling of 6p orbital is complete. After the filling of 6s Orbital, the next electron enters the 5d orbital and therefore the filling of seven 4f orbitals begins with Cerium(Z=58) and ends up with lutetium(Z=71).These 14 elements constitutes the  first inner transition series called lanthanides or lanthanoids.

After the filling of 7s orbital, the next two electrons enters the 6d orbitals and therefore the filling of seven 5f orbitals begin with proactinium(Z=91) and ends up with lawrencium(Z=103).

Thorium does not have any electron in the 5f orbital, yet  get it is considered to be a f block element since its properties resemble more the f block element than the d block elements. These 14 elements from thorium(Z=90) to lawrencium(Z=103) constitute the second (or 5f) inner transition series which is called as actinides are actinoids.

Filling of 5d orbitals which started at actinum(Z=89) continues till it is completed at these Uub(Z=112).These 10 elements constitute the 6d transition series. The filling of 6d, orbital the filling of 7p orbitals begins at Uut (Z= 118) which ends at Uut (Z=118) which belongs to noble gas family.