If two similar atoms come close to each other and form a bond by sharing their electrons, the shared electrons are equally attracted by the two atoms as the electronegativity of the atoms is same.

Hence no poles are developed. This leads to the formation of completely non-polar bonds.

If two hydrogen atoms form a bond, the electron pair will lie exactly in the middle between the two atoms.

The electron cloud is completely symmetrical and there is no charge separation at all.

When two dissimilar atoms ,having different electro negativities combined together to form a covalent bond, the shared pair of electrons does not lie at equal distance from the nuclei of both the bonded atom but shift towards the atom having greater electronegativity.

One end of the molecule, having more electronegative atom becomes slightly negatively charged while the other end acquire slightly positive charge.

Positive and negative poles are developed and this type of bond is called polar covalent bond. 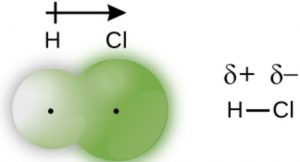 In symmetrical molecules like CO2 , CCl4 , although there are a number of polar bonds present, yet a molecule on the whole or non-polar. This is because the polar bonds cancel the effect of each other. 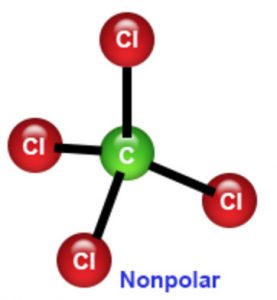 If two atoms linked together have different electro negativities ,the bond formed is polar.

The bond is said to possess partial ionic character.

1) If electronegativity difference between two atoms is 1.9, the bond is said to have 50% ionic character and 50% covalent character.

3) If the electronegativity difference between two atoms is less than 1.9 ,the bond is predominantly covalent.