Whenever a molecule contains a hydrogen atom linked to a highly electronegative atom, this atom attracts the shared pair of electrons more and so this end of the molecules becomes slightly negative while the other end become slightly positive.

The negative end of one molecule attracts the positive end of the other and as a result, a weak bond is formed between them. This bond is called hydrogen bond.

2) The size of the electronegative atom should be small. The smaller the size ,the greater is the electrostatic attraction.

Fluorine having the highest value of electronegativity forms the strongest hydrogen bond. 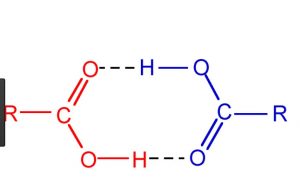 Hydrogen bond is a very weak bond. The strength of hydrogen bond is intermediate between the weak van der waals forces and the strong covalent bonds.

The dissociation energy of the hydrogen bond depends upon the attraction of the shared pair of electrons and hence on the electronegativity of the atom.

Effect or consequences of hydrogen bonding

In aqueous solution ,HF dissociates and gives the difluoride ion instead of fluoride ion. This is due to hydrogen bonding in HF. The molecules of HCl, HBr, HI  do not form hydrogen bonding. This explains the non -existence of compounds like KHCl2 , KHBr2, KHI2.

The molecules of carboxylic acids exist as dimer because of the hydrogen bonding. The molecular masses of such compounds are found to be double than those calculated from their simple formula.

a) The unusually high boiling point of hydrogen fluoride among the halogen acid is due to the existence of hydrogen bonding.

c) Ammonia has higher boiling point than PH3 because there is hydrogen bonding in NH3 but not in PH3.

d) Ethanol has higher boiling point than diethyl ether because there is hydrogen bonding in the ethanol.

Lower alcohols are soluble in water because of the hydrogen bonding which can takes place between water and alcohol molecule.

As the compounds involving hydrogen bonding between different molecules have higher boiling point, so they are less volatile.

The substances which contain hydrogen bonding exist as associated molecule.So their flow becomes  comparatively difficult. They have higher viscosity and high surface tension.

In case of solid ice ,the hydrogen bonding gives rise to a cage like structure of water molecules. As a matter of fact, each water molecule is linked tetrahedral to four water molecules.The molecules are not so closely packed as they are in liquid state. When ice melts ,this case like structure collapses and the molecules come closer to each other.Thus for the same mass of water, the volume decreases and hence density increases.Therefore, ice has lower density than water at 273 K. That is why ice floats.

The bond is formed between the hydrogen atom of one group with the more electronegative atom of the other group.