​The electromagnetic spectrum consists of radiation of different wavelength and frequency.

An instrument used to separate the radiations of different wavelength is called spectroscope or spectrograph.

A spectroscope consists of a prism or a diffraction grating for the dispersion of radiation and a photographic film to examine the emergent radiation with the human eye.

The branch of science dealing with the study of spectra is called spectroscopy.

The spectra are broadly classified into:

When the radiations emitted from some source eg: from the sun or by passing electric discharge through a gas at low pressure or by heating some substance to high temperature is passed directly through the prism and then received on the photographic plate, the spectrum obtained is called emission spectrum.

Depending upon the source of radiation, the emission spectra are mainly of two types:

When white light from any source is analysed by passing through a prism, it is observed that it splits up into 7 different wide bands of colour. These colours are so continuous that each of them merges into the next. Hence the spectrum is called continuous spectrum.

When some volatile salt is placed in the bunsen flame or an electric discharge is passed through a gas at low pressure, light is emitted. The colour of light emitted depends upon the nature of substance.

If this light is resolved in a spectroscope, some isolated coloured lines are obtained on the photographic plates separated from each other by dark spaces. This spectrum is called line emission spectrum on line spectrum.

Each line in the spectrum corresponds to a particular wavelength. Sodium always gives two yellow lines.

White light from any source is passed through the solution or vapours of a chemical substance and then analysed by the spectroscope, it is observed that some dark lines are obtained. These dark lines are supposed to result from the fact that when the white light is passed through the chemical substance,, the radiations of certain wavelengths are absorbed, depending upon the nature of the element.

When hydrogen gas at low pressure is taken in the discharge tube and the light emitted on passing electric discharge is examined with a spectroscope ,the spectrum obtained is called the emission spectrum of hydrogen.It is found to consist of a large number of lines which are grouped into different series ,named after the discoverer. 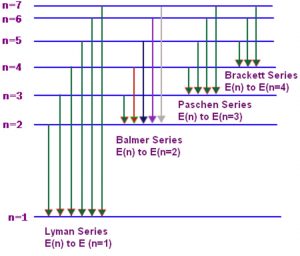 Rydberg in 1890 gave a very simple theoretical equation for the calculation of wavelength of these lines. 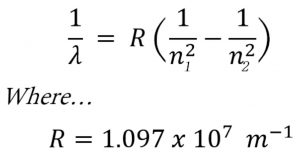 n1 and n2 are whole numbers and for a particular series, n1 is constant and n2 varies .

Where Z is the atomic number.