Solubility of Gases and Solids in Liquids

Solubility of a substance expresses the maximum amount of it which can be dissolved in a specific amount of solvent.

The solubility of a substance depends upon

(i) the nature of solute
(ii) nature of the solvent
(iii) temperature and
(iv) pressure.

Solubility of Solids in Liquids

The solubility of solids in liquids varies greatly with the nature of the solid and liquid, temperature and to a much lesser degree the pressure of the system.

When a solid (solute) is added to the solvent, the solute dissolves because its particles go into the liquid and its concentration in the solution increases. This process is known as dissolution.

The process of dissolution continues until the solution attains a certain maximum concentration.

A solution in which no more solute can be dissolved at the same temperature and pressure is called saturated solution.

A solution in which more solute can be dissolved at the same temperature is called unsaturated solution.

In saturated solution, the concentration of solute in the solution will remain constant under the given conditions i.e., temperature and pressure.

The maximum amount of solute that can be dissolved by the solvent at a particular temperature is called its solubility.

The solubility is also expressed as molar solubility which gives the molar concentration of a substance in a saturated solution.

The solubility of a sold in liquid depends upon the following factors:

(1) Nature of solute and the solvent

A solid dissolves in a liquid (solvent) if the intermolecular interactions are similar in solute and the solvent.

(b) Non-polar (covalent or organic) compounds are soluble in non-polar solvents like benzene, ether, carbon tetrachloride but are very little soluble in water (polar solvent).

Naphthalene and anthracene (non-polar compounds) are not soluble in water but dissolve readily in benzene.

Temperature has a marked effect on the solubility of a solid in a solvent. The solubility may increase or decrease with increase in with temperature. It is observed that most ionic and molecular solids become more soluble at higher temperature.

The variation of solubility of a solid with temperature depends upon the enthalpy of solution.

Since these substances absorb heat on forming solution and therefore, their solubility  increases with increase in temperature in accordance with Le-Chatelier’s principle.

Since these dissolve with evolution of heat, a decrease of solubility with temperature is expected in accordance with Le-Chatelier’s principle. 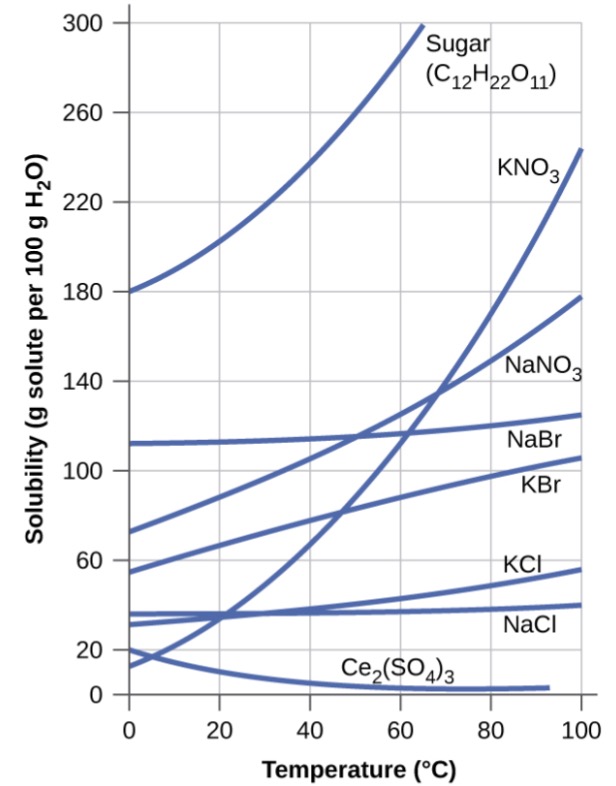 For example: The solubility of sodium sulphate (Na2SO4) increase upto a certain temperature and then decreases as the temperature is further raised.

The temperature corresponding to the break in the solubility curve is known as the transition temperature.

(1) If the solute dissolves with absorption of heat (endothermic process), the solubility increases with rise in temperature.

(2) If the solute dissolves with evolution of heat (exothermic process), the solubility decreases with rise in temperature.

(d) Effect of pressure: The effect of pressure on the solubility of solids in liquids is generally very small . This is because solids and liquids are highly incompressible and practically remain unaffected by changes in pressure.

Solubility of Gases in Liquids

Gases dissolve in liquids to form homogeneous solutions. The solubility of gas in a liquid depends upon:

Gases like nitrogen, hydrogen, oxygen, helium, etc. dissolve in water only to a small extent whereas the gases like ammonia, sulphur dioxide, hydrogen chloride, etc. are highly soluble in water. The most soluble gases are those which chemically react with the liquid solvent

The solubility of a gases in liquids is greatly influenced by pressure and temperature:

(ii) Effect of pressure: The solubility of gases increases with increase of pressure. This behaviour is also in accordance with Le-Chatelier’s principle.

Consider a gas in dynamic equilibrium with a solution.The lower part represents the solution and the upper part is gaseous system at a pressure p and temperature T.

The concentration of the dissolved gas is proportional to the pressure on the gas above the solution.