A solution is a homogeneous mixture of two or more substances whose composition can be varied within certain limits.

For example: If a crystal of sugar is dropped into a beaker of water, it dissolves to form a solution. In this case, sugar is solute and water is solvent.

Depending upon the physical states of the solute and the solvent, the solutions can be classified into the following types.

Methods for expressing the concentration of solution

The concentration of a solution may be defined as the amount of solute present in the given quantity of the solution.

The mass percentage of a component in a given solution is the mass of the component per 100 g of the solution.

If VA and VB are the volume of two components A and B respectively in a solution, then

For example: 10% by volume of ethanol solution means that 10 mL of ethanol is dissolved in enough water so that the the solution is 100 mL. Solutions containing liquids are commonly expressed as volume percentage.

We express the concentrations as weight/volume. It is the mass of solute dissolved in 100 mL of the solution.

When a solute is present in very minute amounts (trace quantities), the concentration is expressed in parts per million abbreviated as ppm.

It is the parts of a component per million parts of the solution. It is expressed as

For example: Suppose a litre of public supply water contains about 3 x 10-3 g of chlorine.

The parts per million parts of chlorine is:

Atmospheric pollution in cities due to harmful gasses is generally expressed in ppm.

Molarity of a solution

The units of molarity are moles per litre (mol L-1)

If nB moles of solute are present in V mL of solution, then

Thus, a solution which contains one gram mole of a solute dissolved in 1 kg of water is regarded as 1 molal solution.

The units of molality are moles per kilogram i.e., mol kg-1. It is represented by the symbol m.

If nB moles of solute are dissolved in W grams of solvent, then

A solution contains nA moles of solute and nB moles of the solvent.Then

The sum of mole fractions of all the components in solution is always equal to one.

If the mole fraction of one component of a binary solution is known, that of the other can be calculated.

It is the number of gram equivalents of the solute dissolved per litre of the solution. It is denoted by N. 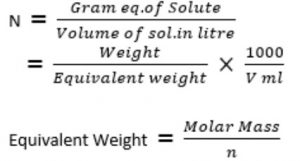 The units of normality are gm equivalent per litre i.e, g equiv L-1.

Like molarity, normality of a solution also changes with temperature.

Relationship between Normality and Molarity of Solutions

The normality and molarity of a solution are related as:

where basicity is the number of H+ ions that a molecule of an acid can give in solution.

For example: Normality of H2SO = 2 x Molarity of H2SO4

where acidity is the number of OH¯ ions that a molecule of base can give in solution.

For example: Normality of KOH = 1 x Molarity of KOH

It is the number of formula masses of the solute dissolved per litre of the solution. It is represented by F.

The term formality is used to express the concentrations of ionic substances.

The ionic compounds such as NaCl, KNO3, CuSO4, etc. do not exist as discrete molecules. In such cases, we do not use the term mole for expressing the concentration. The sum of the atomic masses of various atoms constituting the formula of the ionic compounds is called gram formula mass.