The accurate values of molar masses can be obtained only if the following two conditions are met.

(i) The solutions should be dilute

(ii) The solute must not dissociate or associate in solution

The equations derived for measuring the colligative properties are for non-electrolyte solutes which do not undergo any dissociation or association in the solution.

Discrepancies in determination of molar mass arise when the solute dissociate or associate on dissolving in a solvent. This is because due to the association or the dissociation of the solute molecules in the solution, the number of molecules undergo a change.

In certain solvents, generally non-polar, the solute molecules undergo association i.e. two, three or even more molecules exist in combination with each other to form bigger molecules. For example: suppose n simple molecules combine to form an associated molecule as :

For example: In benzene solvent, both ethanoic acid (acetic acid) and benzoic acid exist as dimers as:

The molar masses of ethanoic acid and benzoic acid have been found to be nearly 120 and 244 which are about double than their normal values of 60 and 122. The association of solute molecules in a solution is generally due to the hydrogen bonding between these molecules.

For example: benzoic acid and ethanoic acid exist as dimers due to the formation of hydrogen bonds. Due to association of ethanoic acid or benzoic acid, the ΔTf or ΔTb value will  be about half of the normal value. Therefore, the molar mass calculated on the basis of ΔT will be about twice the expected value.

Molecules of certain substances (acids, bases and salts) dissociate or ionise in a solvent to give two or more particles.

For example: AB dissociates to give double number of particles as:

For example, KCl dissociates to give K+ and Cl– ions.

If we dissolve 1 mol of KCl (74.5 g) in water, we expect 1 mol of K+ and 1 mol of Cl– ions to be produced in the solution. Therefore, there would be 2 mol of particles in the solution  instead of 1 mol. Consequently, the colligative properties would also be about double than expected.

In 1886, Van’t Hoff introduced a factor called Van’t Hoff factor, i , to express the extent of association or dissociation of solutes in solution. It is the ratio of the normal and observed molar masses (or abnormal molar mass) of the solute, i.e.

In case of association, observed molar mass being more than the normal, the factor i has a value less than 1.

But in case of dissociation, the Van’t Hoff factor is more than 1 because the observed molar mass has a lesser value.

In case of solutes which do not undergo any association or dissociation in a solvent, the Van’t Hoff factor i will be equal to 1 because the observed and normal molar masses will be same.

Since the molar masses are inversely proportional to the colligative property. Van’t Hoff factor may also be expressed as:

(i) Degree of dissociation: It is defined as the fraction of total substance that undergoes dissociation into ions, i.e.

Suppose a molecule of an electrolyte gives n ions after dissociation. Then if we start with 1 mole of the solute, and α is the degree of dissociation, then at equilibrium: 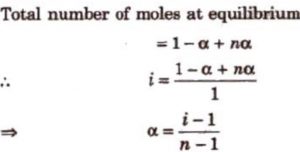 Knowing the value of i from observed molar mass and normal molar mass, degree of dissociation, α can be calculated.

For the electrolytes of the type AB, such as KCl, NaCl, etc,.the number of particles in solution i.e. n=2

(ii) Degree of association: It is defined as the fraction of total number of molecules which combine to form associated molecules, i.e.

For example: suppose n simple molecules of the solute associate to form the associated molecule A.

If we start with 1 mole of A and α is the degree of association, the concentration of the species after association is

Thus, the colligative properties will correspond to (1-α+ α/n) mole particles rather than one mole of particles.

Knowing n the number of simple molecules which combine to give associated molecule, observed molar mass, degree of association(α) can be calculated.