You are here: Home / Class 12 / Chemistry / General Principles and Processes of Isolation of Elements / Purification or refining of the Metal

Purification or refining of Metals

The metal obtained by any of the above methods is usually impure and is known as crude metal. Therefore, the crude metal is to be purified.

The impurities may be in the form of

1) unreduced oxides of the metals

The process of purifying the crude metal is called refining.

Some of the common methods of refining are :

This method is useful for low boiling metals. In this method, the impure metal is evaporated to obtain pure metal as distillate. The common examples of metals which are purified by distillation are zinc and mercury.

This method is used for refining the metals having low-melting points, such as tin, lead, bismuth. etc.

In this method, the impure metal is placed on the sloping hearth of the reverberatory furnace and is gently heated in an inert atmosphere of carbon monoxide.

The metal melts and flows down leaving the non-fusible impurities (called dross) on the hearth. The pure metal is collected the bottom of the sloping hearth in a receiver. 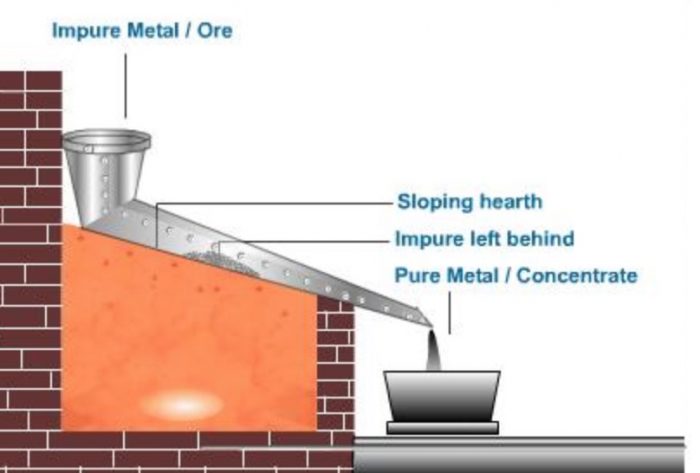 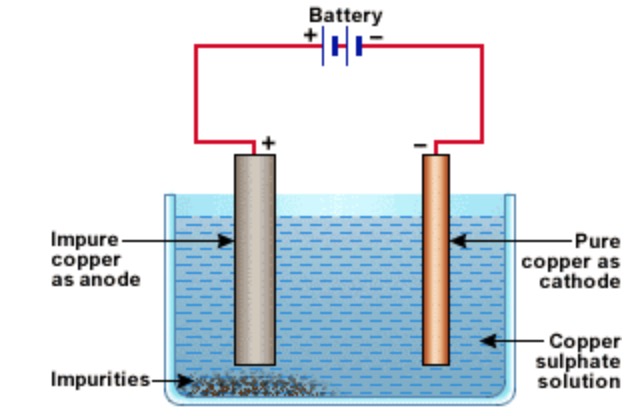 It is based upon the phenomenon of electrolysis.

1) The impure meal is made to act as anode.

2) A strip of the same metal in pure form is used as cathode.

3) Both anode and cathode are placed in a suitable electrolytic bath containing soluble salt of the same metal.

5) The impurities fall down below the anode as anode mud.

The reaction occurring at the electrodes are :

b) On passing electric current, metal ions from the electrolyte are deposited at the cathode in the form of pure metal.

c) An equivalent amount of metal dissolves from the anode into the electrolyte in the form of metal ions.

The reactions occurring at electrodes are :

d) The impurities settle down below the anode in the form of anode mud.

The anode mud may have impurities of antimony, selenium, tellurium, silver, gold and platinum.

This method is used for metals which are required in very high purity.

For example: extremely pure silicon, germanium, boron, gallium and indium are refined by this method.

This method is based on the principle that the impurities are more soluble in the melt than in the solid state of the metal.

An impure metal on solidification will deposit crystals of pure metal and the impurities will remain behind in the molten part of the metal.

a) In this method, the impure metal is cast into a thin bar.

b) A circular mobile heater is fixed at on end of the rod of impure metal.

c) One zone of the bar is melted by a circular mobile heater in the atmosphere of an inert gas like argon.

d) At the heated zone, the metal melts. As the heater moves slowly, the impurities also move into the adjacent molten part.

e) In this way, the impurities are made to move into one end which is finally cut off and discarded.

f) The molten metal present at the colder region solidifies in the mean time since it is away from the heater.

g) Thus, we get completely pure metal by this method.

This method is specially useful for producing semiconductors of very high purity.

This method is based on the fact that certain metals are converted to their volatile compounds while the impurities are not affected during compound formation.

The compound formed decomposes on heating to give pure metal.

Thus, the two requirements are

1)  The metal should form a volatile compound with an available reagent.

2) The volatile compound should be easily decomposable so that the metal can be easily recovered.

For example: Nickel is refined by this technique and the method is known as Mond process.

In this method, nickel is heated in a steam of carbon monoxide to form volatile nickel carbonyl Ni(CO)4.

In this method, the metal is converted to a volatile unstable compound (e.g., iodide) taking care that the impurities are not affected during compound  formation.

The compound thus obtained is decomposed to get the pure metal.

This method is used for the purification of metals like titanium and zirconium. 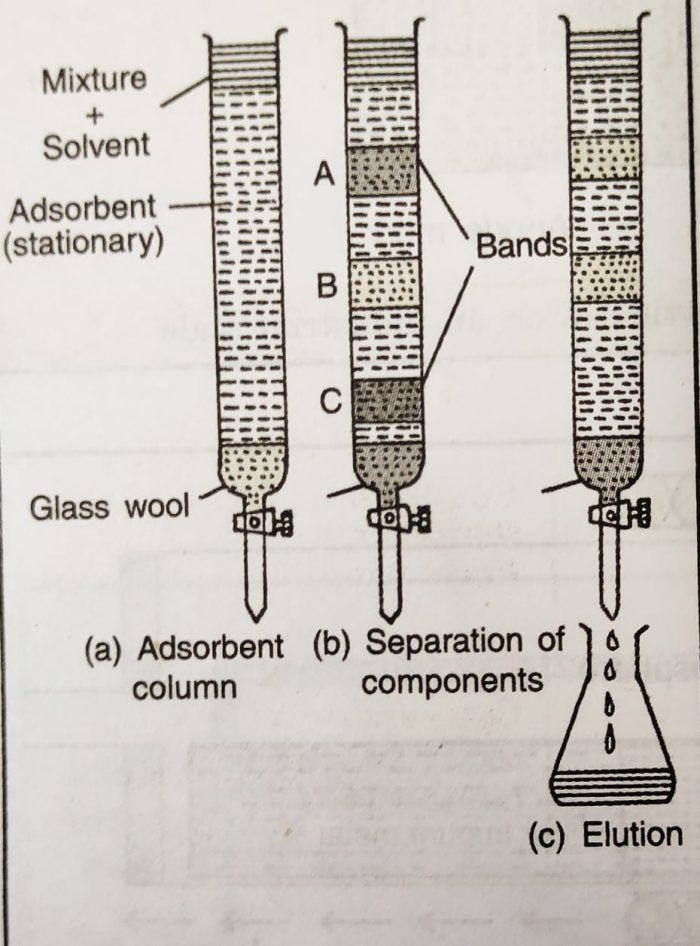 This method of separation or purification is based on the differences in the adsorbing capacities of the metal and its impurities on a suitable adsorbent.

This technique of chromatography is based on the principle that different components of a mixture are differently adsorbed on an adsorbent.

1) The mixture is put in a liquid or gaseous medium (called moving phase) which is moved through a porous medium (adsorbent called stationary phase).

2) Different components of the mixture are adsorbed at different levels in the column.

4) Thus, the technique consists of two phases one of these is stationary phase of large surface area and the second is a moving phase which is allowed to move slowly over the stationary phase.

5) The stationary phase is either a solid or a liquid while the moving phase may be a liquid or gas.

7) Thus components of a sample are separated from each other as they move through the stationary phase.

Column chromatography is an important technique in which an adsorbent (e.g., alumina, Al2O3) is packed in a glass column.

a) The mixture to be separated or purified is taken in a suitable solvent and is applied on the top of the column.

b) The components of the mixture get absorbed on the column at different places.Then they are extracted with a suitable solvent (called eluent).

d) The process of elution is repeated a number of times to achieve complete separation. This method is especially suitable for the elements which are available only in minute quantities and the impurities are not very much different in their chemical behaviour from the element to be purified.