General Principles and Processes of Isolation of Elements 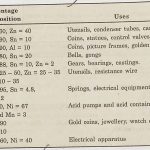 Uses of Aluminium (i) Aluminium is used for making electrical transmission cables as it is a good conductor of electricity. (ii) Aluminium powder is used as a reducing agent in thermite welding. (iii) In the form of finely divided powder, it is used in anti-rust paints and lacquers. (iv) Aluminium foils are used up for wrapping cigarettes, food stuffs, chocolates, … END_OF_DOCUMENT_TOKEN_TO_BE_REPLACED 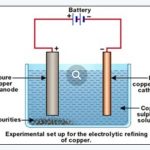 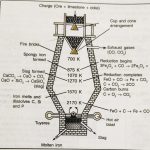 Occurrence and Principle of Extraction of Iron Iron is the second most abundant metal occurring in the earth's crust.It is a reactive metal and does not occur in the free state. In combined state  Occurs as oxides, carbonates.and sulphides. The common ores of iron are (1) Haematite Fe2O3  (2) Magnetite  Fe3O4 (3) Limonite Fe2O3.3H2O (4) Iron pyrites FeS2 (5) … END_OF_DOCUMENT_TOKEN_TO_BE_REPLACED 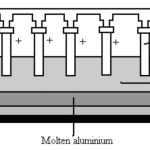 Occurrence and Extraction Aluminium occurs widely as a constituent of rocks and soils. The main ores of aluminium are : Bauxite : Al2O3.2H2O Cryolite : Na3AlF6 Feldspar: KAlSi3O8 Mica : KAlSi2O10(OH)2 In India, aluminium occurs mostly in the form of mica. The ores of mica are located in the states of Bihar, Tamil Nadu, Madhya Pradesh, Jammu and … END_OF_DOCUMENT_TOKEN_TO_BE_REPLACED

Thermodynamic Principles of Metallurgy Thermodynamic considerations are very important in metallurgical processes. These help in deciding the temperature and the choice of reducing agents in the reduction processes. The feasibility of a process can be predicted in terms of Gibbs energy change (ΔG) at any specified temperature. This is related to enthalpy change (ΔH) … END_OF_DOCUMENT_TOKEN_TO_BE_REPLACED 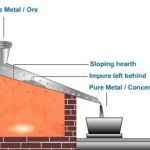 Purification or refining of Metals The metal obtained by any of the above methods is usually impure and is known as crude metal. Therefore, the crude metal is to be purified. The impurities may be in the form of 1) unreduced oxides of the metals 2) non-metals like C, Si, P, As, S etc. 3) foreign metals 4) slag or flux. The process of purifying the crude … END_OF_DOCUMENT_TOKEN_TO_BE_REPLACED 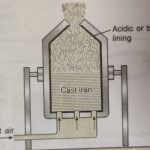 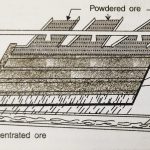 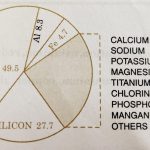 Modes of Occurrence of Elements The elements generally occur in the free state (called native state) or in the combined state. This is mainly because of different chemical reactivities of elements. 1) Native State The elements which have very low reactivity and are not attacked by oxygen or air, moisture, carbon dioxide or other non-metals occur in the free state, called … END_OF_DOCUMENT_TOKEN_TO_BE_REPLACED