Occurrence and Principle of Extraction of Iron

Iron is the second most abundant metal occurring in the earth’s crust. It is a reactive metal and does not occur in the free state. In combined state

Occurs as oxides, carbonates and sulphides. The common ores of iron are

Though iron pyrites (FeS2) is also common ore of iron, but because of its higher sulphur content, it is not used for the production of iron.

The cast iron is usually extracted from its oxide ore (haematite). This process involves the following steps:

The ore is crushed in jaw crushers and is broken to small pieces of about 1 inch in size. The crushed ore is concentrated by gravity separation process in which it is washed with water to remove clay, sand, etc.

The concentrated ore is then calcined (heated strongly in the presence of a limited supply of air) in a reverberatory furnace. During this process, the following changes take place:

(i) Moisture is removed.

(ii) The impurities such as sulphur, phosphorus and arsenic are converted to their gaseous oxides which are volatile and escape.

If some ferrous carbonate is present, it changes to oxide.

This prevent the loss of iron due to the formation of ferrous silicate (slag) during smelting.

(iii) The entire mass becomes porous which helps in the reduction process at a later stage.

The calcined ore is reduced with carbon i.e., smelted in the blast furnace.It is a tall cylindrical furnace made of steel lined with fire bricks. It is narrow at the top and has cup and cone arrangement for the introduction of the charge and outlet for waste gases. The cup and cone arrangement prevents the exit of gases during the charging process. At the base of the furnace, it is provided with

(1) tuyeres arrangement for the introduction of hot air,

(2) a tapping hole for withdrawing molten iron and

(3) an outlet through which slag can be flown out.

a) The calcined ore (8 parts) is mixed with coke (4 parts) and limestone (1 part) and is introduced from the top through cup and cone arrangement.

b) A blast of air preheated at about 1000 K is blown upwards with the help of tuyeres arrangement.

e) As the gases move up, they meet the descending charge and the temperature falls gradually.

The following reactions take place in the furnace : 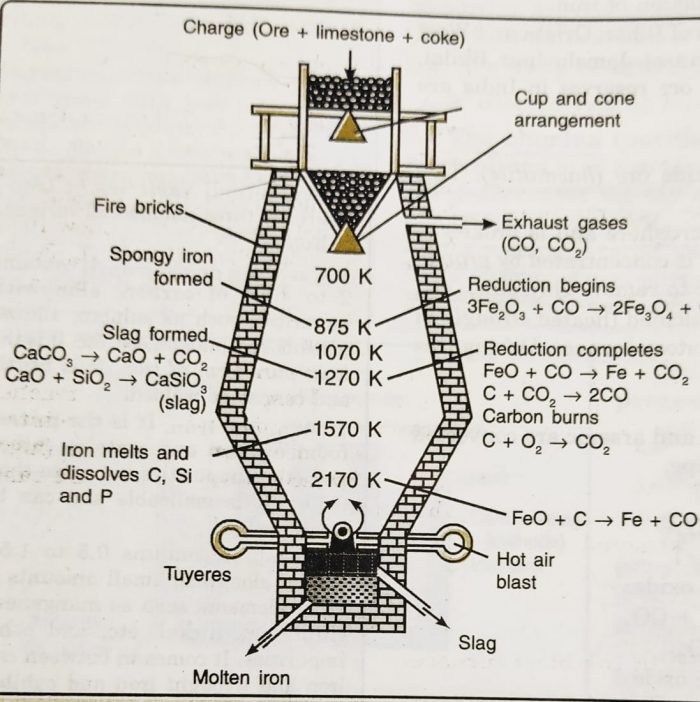 (1)  Combustion zone: At the base, coke burns to produce CO2 , which starts rising upward during the reaction. The reaction is exothermic and heat produced raises the temperature to about 2200 K. This region is called combustion zone.

(2) Fusion zone: As carbon dioxide rises upward, it comes in contact with layers of coke
and gets reduced to carbon monoxide.

This is an endothermic reaction and therefore, the temperature is lowered to about 1570 K. The iron produced in the upper region melts here. Any Fe2O3 if present undergoes reduction by hot coke to iron. This region is called fusion zone.

(3) Slag formation zone: In the middle portion of the furnace, the temperature is about 1270 K. In this region limestone decomposes to produce lime (CaO) and carbon dioxide (CO2), The lime thus produced acts a a flux and combines with silica (present as an impurity) to produce slag.

The molten slag forms a separate layer (being lighter) above the molten iron. This region is called slag formation zone.

(4) Reduction zone: The temperature near the top of the furnace is of the order of 875 K. The oxides of iron are reduced by carbon monoxide to iron.

This region of the furnace is called reduction zone. The spongy iron produced in the reduction zone moves down slowly and melts in the fusion zone.

At the lower hotter part, the main reaction is :

It dissolves some carbon, silicon, phosphorus and manganese and forms the lower layer at the base of furnace. The iron thus obtained is called pig iron and cast into variety of shapes.

Wrought iron is the pure form of iron and contains less than 0.5% impurities. The cast iron obtained above contains about 2.5-5% carbon and other impurities such as S, P, Si and Mn. In order to convert cast iron into wrought iron, the percentage of carbon and that of other impurities has to be decreased. This is done by heating the cast iron on the hearth of a reverberatory furnace (known as puddling furnace) with haematite. The haematite supplies the oxygen and oxidises carbon, silicon, manganese and phosphorus present in the cast iron to carbon monoxide (CO), silica (SiO2), manganese oxide (MnO) and phosphorus pentoxide(P2O5) respectively.

Whereas CO and SO2 escape, MnO and silica (SiO2) combine to form manganous silicate (MnSiO3) as slag.

The metal is removed and freed from slag by passing through rollers.The melting point of wrought iron is about 1673 K and it can be welded at about 1273 K. It is tough, malleable and ductile and can be used for making chains, bolts , frameworks, etc.