You are here: Home / Class 12 / Chemistry / General Principles and Processes of Isolation of Elements / Modes of Occurrence of Elements and Metals

Modes of Occurrence of Elements

The elements generally occur in the free state (called native state) or in the combined state. This is mainly because of different chemical reactivities of elements.

The elements which have very low reactivity and are not attacked by oxygen or air, moisture, carbon dioxide or other non-metals occur in the free state, called native state.

The elements which are reactive and have a tendency to combine with oxygen or air, moisture, carbon dioxide and non-metals like carbon, nitrogen, sulphur, phosphorus, arsenic, halogen, etc. occur in the combined state.

These elements occur in the crust of the earth in the form of their compounds. In the combined state the non-metals are usually found in the reduced form and the metals in the oxidised form. 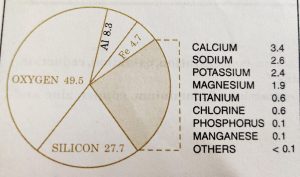 Among metals, aluminium is the most abundant. It is the third most abundant element in earth’s crust (8.31% by wt). It occurs widely as a constituent of rocks and soils. It is a major component of many igneous minerals including mica and clay.

Iron is the second most abundant metal in earth’s crust. It forms a variety of compounds which have various important uses. This makes iron a very important element. Iron is also one of the essential elements in biological systems.

Most of the metals have a tendency to react with moisture, oxygen, sulphur, halogens, etc. and therefore, occur in the crust of the earth in the form of their compounds such as oxides, sulphides, halides, silicates, carbonates, nitrates, phosphates, etc.

The naturally occurring chemical substances in which metals occur in the earth’s crust are called minerals. The mineral, from which the metal can be economically and conveniently extracted, is called an ore.

The type of mineral from which the metal can be extracted is decided on the basis of
profitability.

For example: Metals are not generally extracted from silicate minerals because of the difficulties during extraction.

2) Aluminium occurs in the earth’s crust in the form of two minerals, bauxite (Al2O3.2H20)
and clay (Al2O3.2SiO2.2H20). Aluminium can be conveniently and economically extracted from bauxite, while it has not been possible to extract aluminium from clay by some easy and cheap method.