Nernst gave a relationship between electrode potentials and the concentration of electrolyte solutions known as Nernst equation.

For a general electrode reaction,

the Nernst equation is

n= Number of electrons gained during the electrode reaction.

The concentration of the solid phase, [M(s)] is taken to be unity.
The above equation may also be written as:

The electrode reactions are :

The electrochemical cell reaction is:

The electrode potential for the two electrodes can be calculated by using Nernst equation:

The valencies of zinc and copper are the same i.e. n=2.

Consider an example in which the valencies of the two metals used in the two half cells are not same.

The cell reaction is :

The EMF of a cell,

Two electrons are released by one copper atom but one electron is accepted by Ag+ according to the reaction.

The electrode potential of two electrodes may be written according to Nernst equation as: 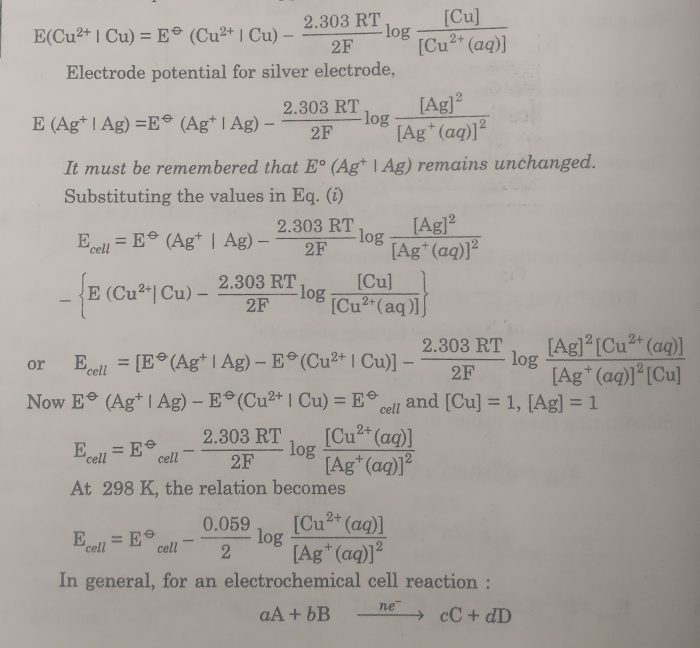 Some examples of Nernst Equation for cells

2) Calculation of concentration of a solution of Half cell

When in a galvanic cell, all the concentrations except one are known, then the unknown concentration can be calculated by measuring the cell potential and using Nernst equation.

Electrochemical Cell and Gibbs energy of the Reaction

In electrochemical cells, the chemical energy is converted into electrical energy. The cell potential is related to Gibbs energy change.

In an electrochemical cell, the system does work by transferring electrical energy through an electric circuit.

For a reaction, occurring in an electrochemical cell whose electrodes differ in a potential by Ecell , the work done when amount of charge nF is pushed along by the potential of the cell is given by nFEcell so that

where F is the Faraday constant (the charge on one mole of electrons) and n is the number of moles of electrons transferred in them. When voltaic cell operates, work is done on the surroundings, as electrical energy flows through the external circuit. Such work by convention is taken as negative.

We use standard cell potential, Eøcell

where ΔrGø is the standard Gibbs energy for the reaction.

If the activity of all the reacting species is unity, then E=Eø and we have

Thus, from the measurement of Eø we can calculate an important thermodynamic property. From the temperature dependence of Eø we can also calculate ΔrHø and ΔrSø

From the standard Gibbs energy, we can also calculate equilibrium constant by the equation: