The power of the electrolytes to conduct electric current is termed conductance or conductivity. Electrolytic solutions also obey Ohm’s law.

This law states that the current flowing through a conductor is directly proportional to the potential difference across it, i.e.

where p (Greek, rho) is the constant of proportionality and is called specific resistance or resistivity. The resistance depends upon the nature of the material.

Thus, resistivity is defined as the resistance of a conductor of 1 cm length and having area of cross-section equal to 1 cm2.

The units of resistivity are

It is a measure of the ease with which current flows through a conductor. It is expressed as G. It is inverse of the resistance, i.e

The units of conductance are reciprocal ohm (ohm-1 ) or mho. Ohm is also abbreviated as Ω so that ohm-1 may be written as Ω-1

According to S.I. system, the units of electrical conductance are siemens,

The inverse of resistivity is called conductivity (or specific conductance). It is represented by the symbol, κ (Greek kappa)

The units of conductivity are

In SI units, l is expressed in m, area of cross-section in m2 so that the units of conductivity are S m-1. The magnitude of conductivity depends upon the nature of the material.

Molar conductivity is defined as the conducting power of all the ions produced by dissolving one mole of an electrolyte in solution.

It is denoted by Λm (lambda).

where M is the molar concentration. If M is in the units of molarity i.e. moles per litre

The units of molar conductance can be derived from the formula,

It is defined as the conducting power of all the ions produced by dissolving one gram equivalent of an electrolyte in solution.

where C is the concentration in gram equivalent per litre (or normality). The units of equivalent conductivity are ohm cm2 (g equiv-1) as obtained from the formula:

In terms of SI units, the units of equivalent conductivity are S m2 equiv-1 and Λ is expressed as: 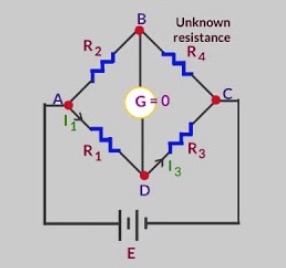 Knowing the value of R1, R2, R3 ,unknown resistance R4 can be calculated.

For measuring the resistance of an ionic solution, we face two difficulties:

1) For electrolytic solution, direct current cannot be used because it causes electrolysis of the solution.As a result the concentration of the electrolyte changes and this results in the change in the resistance of the solution.To overcome this problem, alternating current in the audio frequency range 550 to 5000 cycles per second is provided by using a suitable electronic circuit commercially available. However, when alternating current is used, ordinary galvanometer fails to detect null point. Since the frequency of alternating current is within the range of human ear, the galvanometer may be replaced by a set of head phones.

2) A solution of unknown resistance cannot be connected to the bridge like a metallic wire or other solid conductor. This problem is solved by using a specially designed vessel called conductivity cell for taking the ionic solution. 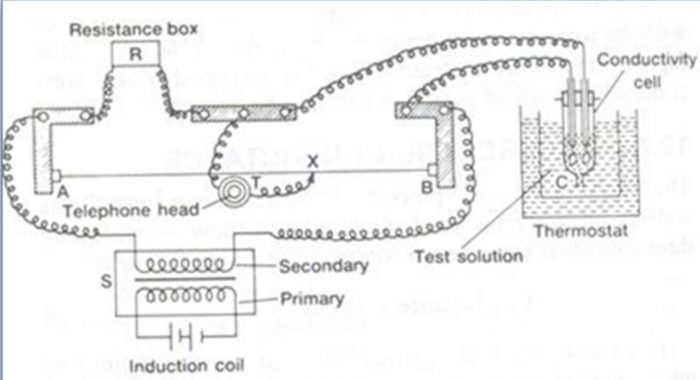 b) The solution whose resistance is to be measured (say C) is placed in the conductivity cell and is attached to the wheatstone bridge.

c) The cell is placed in a thermostat to keep the temperature constant.

d) A variable standard resistance box is attached between points.

e) A suitable value of resistance R is taken out from the standard resistance box.

f) The null point is detected by moving the sliding contact on the wire so that minimum sound is obtained in the earphone. This corresponds to null point.

We have seen that conductivity (κ) is reciprocal of resistivity (ρ), i.e.

where G is the conductance of the cell, l is the distance of separation of two electrodes having cross-section area a cm2. The quantity (l/a) is called as cell constant and is expressed in cm-1.

The cell constant is generally not calculated from the values of l and a because these are difficult to measure for a given cell. However, it is usually determined accurately by measuring the conductance of a standard solution whose conductivity is known. For this purpose, a standard solution of KCl is used whose conductivity is known at different concentrations and temperatures.

Once the cell constant is known, the conductivity of any solution can be easily calculated from the measured resistance or conductance of the electrolytic solution.