Applications of the Electrochemical Series

The main applications of the electrochemical series are: 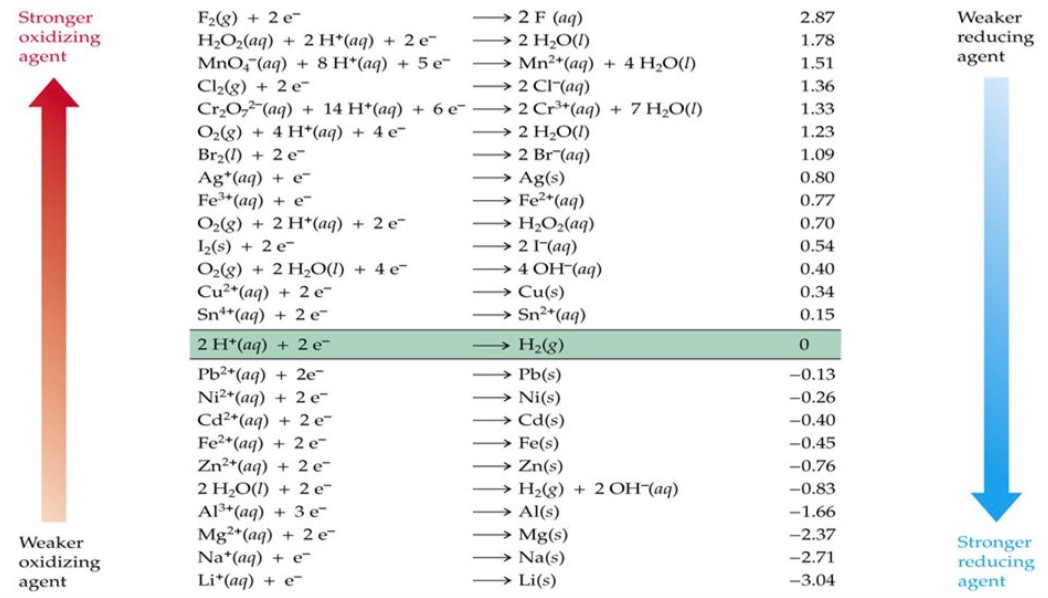 In the electrochemical series the substances are arranged in the decreasing order of electrode potential i.e. decreasing tendency for reduction to occur or power as oxidising agent.

The elements at the top of the table have maximum tendency to get reduced and consequently they will act as good oxidising agents.

The substances at the bottom of the table have lower electrode potential values, therefore they have least tendency to get reduced. Consequently they may be oxidised and act as good reducing agents.

Standard electrode potential of fluorine is the highest in the table indicating that the fluorine gas (F2) has maximum tendency to get reduced to fluoride ions (F¯) and therefore, fluorine gas is the strongest oxidising agent and fluoride ion is the weakest reducing agent.

Lithium has the lowest electrode potential in the table indicating that lithium has the maximum tendency to get oxidised and hence lithium metal is the most powerful reducing agent or lithium ion is the weakest oxidising agent in aqueous solution.

2) Calculation of the E.M.F. of the cell

The E.M.E. of the cell which is the difference between the reduction potential of the cathode and anode is determined by the following steps:

Step 2: Multiply by suitable number to equate the number of electrons in the two equations. However, it may be noted that electrode potential values, Eø are not multiplied.

3) Predicting feasibility of the reaction

The species to release electrons must have lower electrode potential as compared to the species which is to accept electrons.

E° value of Cu +0.34 V and the E value of Ag + 0.80 V. Since the electrode potential of Ag is more than that of Cu, this means that silver has greater tendency to get reduced in comparison to copper. Thus, the reaction

occurs more readily than the reaction

Similarly, since reduction potential of Cu is less than that of Ag, this means that Cu will be readily oxidised in comparison to Ag. Thus, the reaction

occurs more readily than the reaction

Therefore, silver will be reduced and copper will be oxidised and the above reaction is not feasible.

Only those metals can liberate hydrogen from the acid which have negative values of reduction potentials i.e. -E° value.

Hydrogen will have greater tendency to get reduce (accept electrons) and the metal can lose electrons (get oxidised) and hydrogen gas is liberated. These metals are also called active metals.

Metals like copper and silver have +E° values i.e. electron accepting tendencies. Their atoms are not in a position to lose electrons to H+ ions of the acid. Therefore, hydrogen gas is not liberated.

If the standard electrode potential of an electrode is greater than zero (i.e.+ve), then its reduced form is more stable as compared to hydrogen gas.

If the standard electrode potential is negative, then hydrogen gas is more stable than the reduced form of the species.