These are broadly of two types:

These constitute the electrochemical reactions in which chemical energy is converted to electrical energy. In these cells, spontaneous redox reaction is used to generate an electric current.

An early example of a galvanic cell is a Daniel cell which was invented by the British chemist John Daniel in 1836. Daniel cell was constructed on the basis of the following spontaneous redox reaction :

For example: When electric current is passed through molten sodium chloride, sodium is produced at cathode and chlorine is liberated at anode. 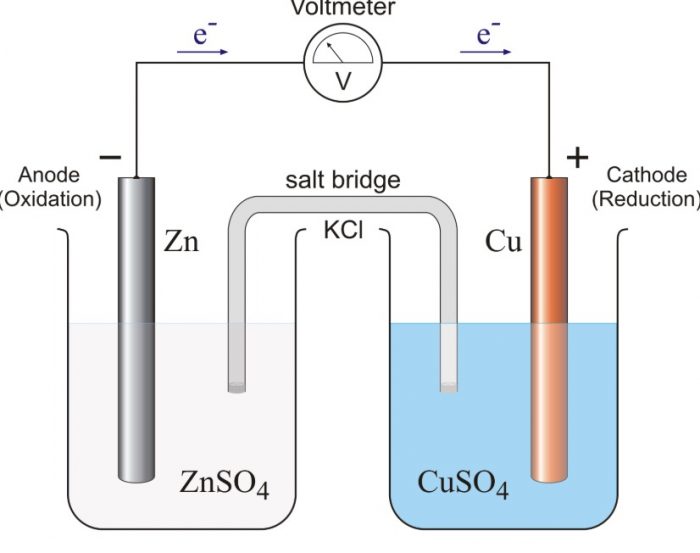 The devices in which electrical energy is produced from chemical reactions are called electrochemical cells or galvanic cells or voltaic cells.

In these cells, oxidation and reduction reactions occur in separate containers called half cells and the redox reaction is spontaneous. Electrical energy is produced during such reactions.

3) The metallic rods in the beaker are connected to the ammeter by means of an insulated wire through a key.

4) Ammeter is used to know the passage of current which moves in opposite direction to the flow of electrons.

5) The solutions in the two beakers are connected by an inverted U-tube containing saturated solution of some electrolyte such as KCl, KNO3, or NH4NO3 which does not undergo a chemical change during the process. The saturatecd solution is generally taken in agar-agar jelly or gelatin.

6) The two openings of the U-tube are plugged with some porous material such as glass wool or cotton. The U-tube which connects the two glass beakers is called a salt-bridge.

7) When the circuit is complete by inserting the key in the circuit, it is observed that electric current flows through external circuit as indicated by the ammeter.

(3) Copper gets deposited on the electrode.

(4) The concentration of Cu2+(aq) in the CuSO4 (aq) solution decreases.

(5) There is a flow of electrons in the external circuit from zinc rod to copper rod. Therefore, the current flows from copper to zinc.

During the reaction, zinc is oxidised to Zn2+ ions which go into the solution. Therefore,

the zinc rod gradually loses its weight. The electrons released at the zinc electrode move towards the other electrode through outer circuit. Here, these are accepted by Cu2+ ions of CuSO4 solution which are reduced to copper. The metal gets deposited on the copper electrode.

In an electrochemical cell:

3) Electrons flow from anode to cathode.

The two containers involving oxidation and reduction half reactions are called half cells.

Salt Bridge and its functions

It is usually an inverted U-tube filled with concentrated solution of inert electrolyte. The essential requirements of electrolyte are:

1) The mobility of the anion and cation of the electrolyte should be almost same.

2) The ions of the electrolyte are not involved in electrochemical change.

3) The ions do not react chemically with the species of the cell. Generally, salts like KCl, KNO3, NH4NO3 are used. The saturated solutions of these electrolytes are prepared in agar agar jelly or gelatin. The jelly keeps the electrolyte in semi-solid phase and thus prevents mixing.

Functions of the salt bridge

The salt bridge connects the two solutions of the half cells and their electrodes are connected by means of a wire.

The electrons released by the oxidation of Zn to Zn2+ ions will be accepted by the Cu2+ ions of CuSO4 in the other half cell and the latter will be reduced to copper. The positively charged Zn2+ ions pass into the solution.After sometimes, this results into accumulation of extra positive charge in the solution around cathode will acquire extra negative charge due to excess of SO42- ions.

The accumulation of charges in the two half cells is prevented by using salt bridge, which provides a passage for the flow of the charge in the internal circuit. When the concentration of Zn2+ ions around anode increases sufficient number of Cl¯ ions migrate from the salt bridge to the anode half cell.

To neutralise the excess negative charge due to the additional S042-  in cathode half cell, sufficient number of K+ ions migrate from the salt bridge to this half cell. Thus, the salt bridge provides cations and anions to replace the ions lost or produced in the two half cells.

Functioning of the cell when external opposing potential is applied 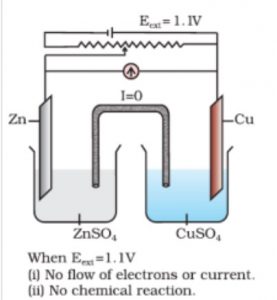 As long as the external opposite is less than 1.10V, the electron continue to flow from Zn rod to Cu rod and hence current flows from Cu to Zn. Zinc dissolves in anode and copper deposits at cathode. 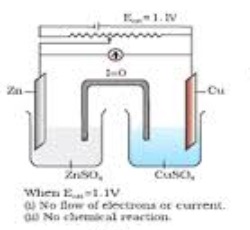 When the opposing voltage reaches the value 1.10 V, the cell reaction stops altogether and no current flows through the cell. 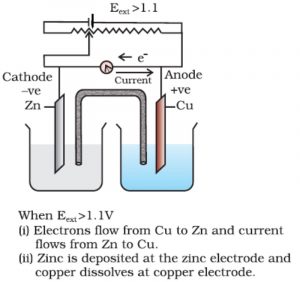 Further increase in the external potential now again starts the reaction but in the opposite direction. In this case electrical energy is used to carry out non-spontaneous reaction. The electrons flow from Cu to Zn rod and current flows from Zn to Cu.

Representation of an Electrochemical Cell

An electrochemical cell or galvanic cell consists of two electrodes: anode and cathode. The electrolyte solution containing these electrodes are called half cells. When these two half cells are combined, a cell is formed.

The metal and the cation are separated either by a semicolon (;) or by a vertical line.The concentration of the electrolyte is also mentioned within bracket after the cation, i.e.

3) The salt bridge which separates the two half cells is indicated by two vertical lines.

1) Sometimes negative and positive signs are also put on the electrodes to show the release and loss of electrons taking place on them.

2) Anode is a negative pole while cathode acts as positive pole.

3) The electrons flow from the negative pole (anode) to the positive pole (cathode) in the external circuit. The current is said to flow in the opposite direction.

Representation of Some Common Cells by Cell Notation

The cell may be represented as:

Cell may be represented as: