A useful battery should also fulfil the following requirements

1) It should be light and compact so that it can be easily transported.

2) It should have reasonably long life both when it is being used and when it is not used.

3) The voltage of the battery should not vary appreciably during its use.

There are mainly two types of commercial cells:

In these cells, the electrode reactions cannot be reversed by an external electric energy source. In these cells, reactions occur only once and after use they become dead. Therefore, they are not chargeable.

In the secondary cells, the reactions can be reversed by an external electric energy source. Therefore, these cells can be recharged by passing electric current and used again and again. These are also called storage cells.

These are used in torches, toys, flash lights, calculators, tape recorders and many other devices.

a) It consists of a zinc cylinder. This is filled with a moist paste of NH4Cl and little of ZnCl2.

b) The zinc cylinder acts as a anode. The cathode is a graphite (carbon) rod.

c) The carbon rod is surrounded by a black paste of manganese dioxide (MnO2) and carbon powder.

d) During use, the zinc case gets consumed and in the end, it will develop holes which are responsible for leakages.  The leak proof cells or dry cells have an iron or steel sheet covering the zinc.

The reactions taking place at the electrodes are:

In the cathode reaction, manganese is reduced from +4 Oxidation state to +3 oxidation state. Ammonia is not liberated as a gas but it Combines with some of the Zn2+ ions produced from the anode to form Complexion having the formula  [Zn(NH3)2]2+

It gives voltage of approximately 1.2 to 1.5 V. This dry cell does not have an indefinite life because NH4Cl being acidic corrodes the zinc Container even when not in use.

A new type of cell which has found use in small electrical circuits such as hearing aids, Watches and cameras is the mercury cell.

It consists of a zinc anode and a mercury (II) oxide cathode. The electrolyte is a paste of KOH and ZnO.

The reactions occurring in the cell are as follows :

It has the advantage that its potential remains almost constant throughout its life. The voltage of mercury cell is approximately 1.35 V.

There are some cells which can be recharged. These are called accumulators or storage cells. These can be recharged and used again and again as a source of electric current. 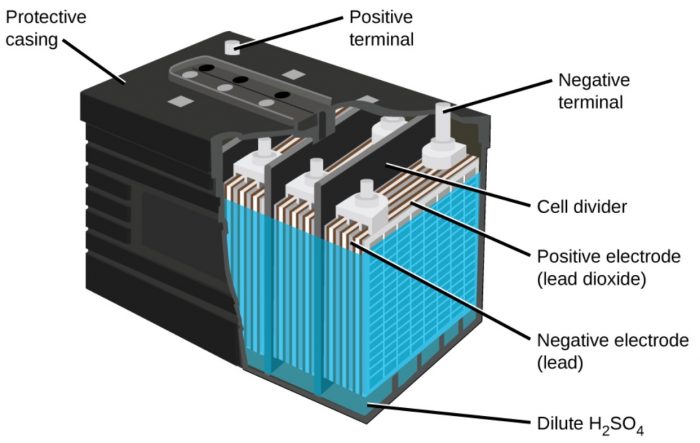 Each battery consists of a number of voltaic cells connected in series. Three to six such cells are generally combined to get 6 to 12 volt battery.

b) The electrolyte is aqueous solution of sulphuric acid.

The following reactions take place in the lead storage cell:

The lead loses two electrons and is oxidised to Pb2+ ions.

The overall anode reaction may be written as :

The PbO2 is reduced as:

The overall cathode reaction is :

During the working of the cell PbSO4 is formed at each electrode and sulphuric acid is used up. As a result, the concentration of H2SO4 decreases and the density of the solution also decreases.

The cell can be charged by passing electric current of a suitable voltage in the opposite direction. The electrode reaction gets reversed. As a result, the flow of electrons gets reversed and lead is deposited on anode and PbO2 on the cathode. The density of sulphuric acid also increases.

The reaction may be Written as

When it is used to start the engine of the automobile, it acts as a voltaic cell and produces electric energy. During recharging, it acts as an electrolytic cell.

This is also a rechargeable cell. It has longer life than the lead storage cell but more expensive than lead storage battery. However, it has some advantages because it is smaller and lighter. It can be used in portable and cordless appliances.

1) It consists of a cadmium anode and a metal grid containing NiO2 acting as a cathode.

2) The electrolyte in this cell is KOH.

The reactions taking place during discharge and charge are:

The reaction products generally remain sticking to the electrodes and can be reconverted by recharging the cell. The charging process is similar to lead storage battery.

It produces a potential of about 1.4 V.

These are voltaic cells in which the reactants are continuously supplied to the electrodes. These are designed to convert the energy from the combustion of fuels such as H, CO, CH4, etc. directly into electrical energy.

1) In this cell, hydrogen and oxygen are bubbled through a porous carbon electrode into concentrated aqueous sodium hydroxide or potassium hydroxide.

2) Hydrogen (the fuel) is fed into the anode compartment where it is oxidised.

3) The oxygen is fed into cathode compartment where it is reduced.

Each electrode is made of porous compressed carbon containing a small amount of catalyst (Pt, Ag or CoO).These fuel cells are more efficient than conventionally used methods of generating electricity on a large scale by burning hydrogen, carbon fuels because these fuel cells convert the energy of the fuel directly into electricity.

There is no electrode material to be replaced as in ordinary battery. The fuel can be fed continuously to produce power.

There are no objectionable by-products and, therefore, they do not cause pollution problems.