Whenever some process occur ,it is usually accompanied by some energy change. The energy may appear in different forms such as heat, light, work.

The evolution or absorption of energy in different processes shows that every substance must be associated with some definite amount of energy ,the actual value of which depends upon the nature of the substance and the conditions of temperature ,pressure volume and composition.

It is represented by symbol U or E.

The energy thus stored within a substance is called its internal energy.

Every substance is associated with a definite amount of internal energy but it is not possible to find its absolute value because it involves certain quantities which cannot be measured.

Internal energy of a system changes when

(1) Heat passes in or out of the systemΔ

(3) Matter enters or leaves the system

Internal energy as a state function

Internal energy is a state function i.e. depends only upon the state of the system and is independent of the method by which this state has been attained.

Let us change the internal energy of the system by doing work called adiabatic work. This can be done in two ways:

(1) By doing mechanical work by rotating a set of small paddles.

(2) By doing electrical work with the help of an immersion rod.

Temperature is found to rise by the same value, from T1 to T2. Thus, the same amount of work done, irrespective of the fact how it was done, produces the same change in state, as measured in terms of temperature change.

(1) If U1 > U2 , the extra energy possessed by the system in the initial state would be given out and  ΔU will be negative.

The units of energy are ergs or Joules.

The internal energy depends upon the quantity of the substance contained in the system. Hence it is an extensive property .

Work is said to have been done whenever the point of application of a force is displaced in the direction of the force.

If F is the magnitude of the force and dl is the displacement of the point of application in the direction in which the force acts, then work done is given by

Two main types of work are:

(2) Work of expansion or compression or Pressure- volume work

It is the work done when the gas expands or contracts against the external pressure.

Consider a gas enclosed in a cylinder fitted with a frictionless piston.

Area of cross -section of cylinder= a sq cm

Pressure on the piston= P

Pressure is force per unit area, force acting on the Piston will be f = P × a

But a × dl= dV, a small increase in the volume of the gas.The small amount of work ( δw) by the gas can be written as:

If the gas expands from initial volume V1 to the final volume V2 ,then the total work done (w) will be given by:

If the gas expands against constant external pressure we get

If the external pressure is slightly more than the pressure of the gas, the gas will contract i.e. the work will be done by the surrounding on the system.

P is the external pressure and hence it is written as Pext.

(1) w is taken as positive if work is done on the system i.e. for compression.

(2) w is taken as negative if work is done by the system i.e. for work of expansion.

Vf  and Vi represents the final and initial volume.

The above expression applies for work of expansion as well as work of compression. This is because

(2) For compressions V2 < V1 so that (V2 -V1) is negative and negative multiplied by negative will be positive.

Work done in isothermal reversible expansion of an ideal gas 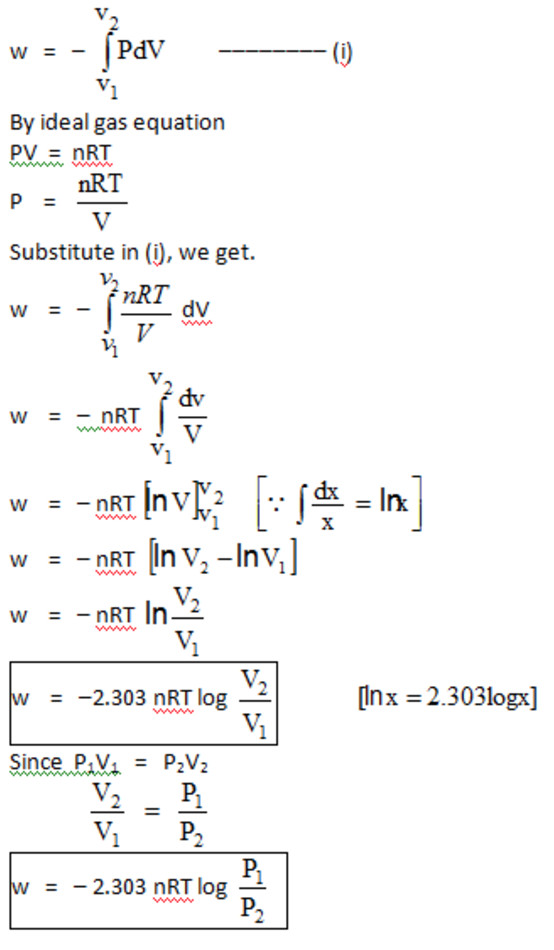 Reversible work of expansion ( wrev ) is the maximum work

For reversible expansion, Pext , should be infinitesimally smaller than Pint. Pext  is the maximum possible value of the pressure. As w = – Pext ΔV ,therefore for a given change of volume, w is maximum.

Free expansion of an ideal gas i.e. expansion against vacuum

If an ideal gas expands against vacuum ,the irreversible expansion is called free expansion.

As Pext =0 for reversible as well as irreversible expansion, work done =0

Heat is another mode of energy exchanged between the system and the surrounding as a result of the difference of temperature between them.

It is represented by letter q.

Both heat and work appear only at the boundary of the system.

When heat is given by the system to the surrounding, it is given a negative sign.

When heat is absorbed by the system from the surrounding, it is given a positive sign.

A calorie is defined as the quantity of heat required to raise the temperature of one gram of water through 1°C.

In the S.I. system, heat is expressed in Joules.

Work and heat are not state functions because their values do not depend merely on the initial and final state but depend upon the path followed.

Energy can neither be created nor destroyed although it may be converted from one form to another.

The total energy of the universe remains constant, although it may undergo transformation from one form to the other.

The energy of an isolated system is constant.

Mathematical formulation of the first law of thermodynamics

The internal energy of a system can be increased in 2 ways:

(1) By supplying heat to the system

(2) By doing work on the system

Suppose the initial internal energy of the system = U1

If it absorbs heat q, its internal energy will become = U1 + q

If work w is done on the system, the internal energy will further increase and become = U1 +q +w

If the work done is the work of expansion, then w = – PΔV