Enthalpy of fusion is the enthalpy change accompanying the transformation of one mole of a solid substance into its liquid state at its melting point. it is also called molar enthalpy of fusion.

It is the amount of heat required to convert 1 mole of a liquid into its vapour state at its boiling point.

It is also called molar enthalpy of vaporisation.

The molar enthalpy of vaporisation of water into its vapour at the boiling point of water is 40.7 KJ.

Sublimation is a process in which a solid on heating changes directly into gaseous state below its melting point.

Enthalpy of sublimation of a substance is the enthalpy change accompanying the conversion of one mole of a solid directly into vapour phase at a given temperature below its melting point.

The enthalpy of sublimation of iodine is 62.39 KJ mol-1

The total amount of heat evolved or absorbed in a reaction is the same whether the reaction takes place in one step in or in a number of steps. The total amount of heat change in a reaction depends only upon the nature of the initial reactants and the nature of the final products and is independent of the path or the manner by which this change is brought about. 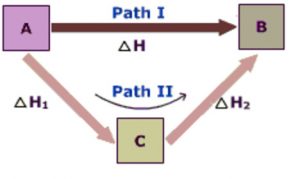 1) When carbon burns to form carbon dioxide directly in one step 393.5 KJ mol-1 of heat is produced

which is same when the reaction take place in one step.

Sulphur may change to SO3 in two steps as follow:

This is the same as for the direct reaction in one step.

1) In the calculation of enthalpy of formation

The enthalpies of formation of many compounds cannot be determined experimentally. These are calculated by the application of Hess’s law.

2) Calculation of enthalpy of allotropic transformation

Elements like carbon and sulphur exist in different allotropic forms. The change of one form to other involves a very small amount of heat and is a very slow process.

The experimental determination of heat changes for such transformation is very difficult. These are calculated by application of Hess’s law.

The experimental determination of the enthalpy of hydration is almost impossible. It can be easily calculated using Hess’s law.

4) Predicting the enthalpy change for any reaction