In a liquid, the molecules are quite close together so that there are considerable forces of attraction between them and hence they are held together in a definite volume.

(1) Liquids have no definite shape: They take up the shape of the vessel in which they are put. This is because the molecules in a liquid are in a state of constant rapid motion.

(2) Liquids have a definite volume: This is because the intermolecular forces of attraction in a liquid are quite strong and unlike gas molecules, the liquid molecules are not completely free to move.

(3) Liquids have much higher density than gases:This is because the molecules in a liquid are quiet close together. Thus the molecules are much more closely packed than those of the gases.

(4) Compressibility :liquids are much less compressible than gases.This is because the intermolecular distances of separation are much smaller in liquid than that in gases.

(5) Diffusion: liquids diffuse like gases but the diffusion is much slower because the liquid molecules are quite close, they undergo a much larger number of collisions with each other. 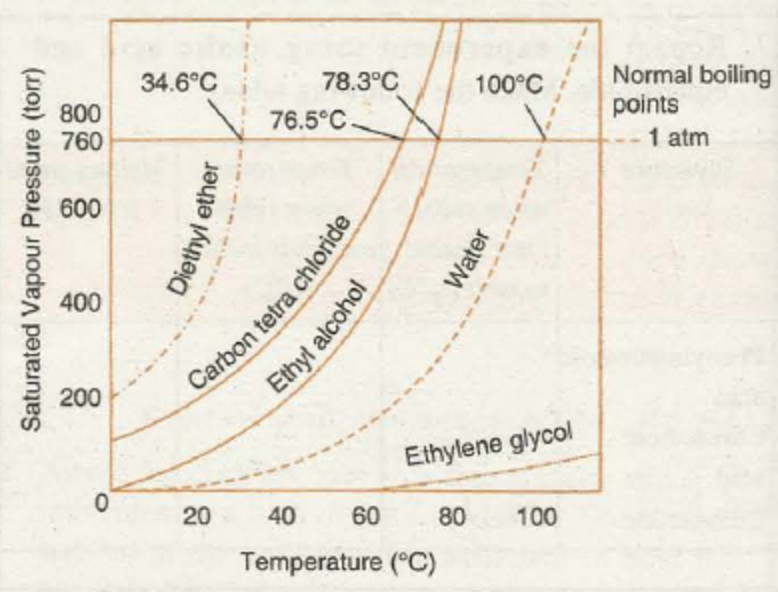 At any particular temperature ,the energy of some of the molecules may be so high that they may overcome the forces of attraction by the neighbouring molecules and may leave the liquid and come in the space above the liquid. This process is called evaporation

If the liquid is added into the evacuated vessel ,then initially, as there are no molecules of vapour, the rate of condensation is zero.

If the temperature is kept constant, the evaporation continues at constant rate as shown by the straight line plot. With the passage of time ,as a number of molecules in the vapour phase becomes more and more ,the rate of condensation also increases.

A stage is reached when rate of condensation becomes equal to rate of evaporation i.e. as many molecules re-enter into a liquid as leave the liquid in the same time.This state is called state of equilibrium .

When a liquid evaporates ,the more energetic molecules leave the liquid. As a result the average kinetic energy of the remaining liquid decreases and hence the temperature falls.

(i) Nature of the liquid : If the intermolecular forces of attraction in the liquid are weak ,the molecules can easily leave the liquid and come into vapour phase and hence the vapour pressure is higher.

For example: The vapour pressure of acetone, benzene is higher than that of water at same temperature.

(ii) Effect of temperature: As the temperature of a liquid is increased, the vapour pressure of liquid increases. 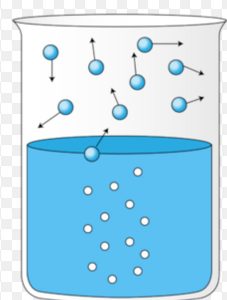 Boiling point of a liquid is defined as the temperature at which the vapour pressure of the liquid becomes equals to external pressure.

Application of effect of external pressure on boiling point

(1) If the external pressure is higher, more heat will be required to make the vapour pressure equal to external pressure and hence higher will be the boiling point. That is why in hospitals ,the surgical instruments are sterilised in autoclaves in which boiling point of water is raised by using a weigh to cover the vent.

(2) If the external pressure is decreased, the boiling point is lowered. This is the reason that a liquid boils at a lower temperature on the top of the mountain than on the sea shore.That is why at hills, use of pressure cooker is essential for cooking food.

(3) It is used for purifying the unstable liquids by distillation under reduced pressure.

The amount of heat required to change 1 mole of the liquid into its vapour at the boiling point is called the heat of vaporisation of the liquid.

Greater the intermolecular forces of attraction present in a liquid, greater is the heat of vaporisation and higher is the boiling point.