Alkali metals cannot be extracted from their ores by the usual methods of extraction of metals because of following difficulties:

1) Alkali metals are strong reducing agents and hence cannot be extracted by reduction of their oxides or chlorides.

2) Alkali metals being highly electropositive cannot be displaced from the aqueous solution of their salts by other metals.

Lithium is prepared by electrolysis of fused mixture of dry lithium chloride and potassium chloride at 723 k.

Potassium chloride is added to increase the conductivity of lithium chloride and also to lower the fusion temperature.The cell is operated at a temperature of about 723 K and current voltage of 8-9 V.

As a result of electrolysis, the following reactions takes place:

The metal thus obtained is 99% pure and is stored by keeping it wrapped in paraffin wax. Lithium being the lightest metal known cannot be stored in kerosene oil since it floats on the surface.

1) It is used in the manufacture of alloys

a) Lithium – lead alloy or white metal which is used for making toughened bearing for motor engines and sheats for cables.

b) Lithium aluminium alloy has great tensile strength and electricity like that of mild steel. It is used for aircraft construction.

c) Lithium magnesium alloy is extremely tough and corrosion resistant which is used for armour plate and aerospace components.

2) It is used for producing thermonuclear energy required for propelling rockets and guided missiles.

3) Lithium is used to make both primary and secondary batteries.

5) lithium carbonate is used in making a special variety of glass which is very strong and is weather proof.

6) Lithium chloride is used in Air conditioning plants to regulate the humidity. It is also used in Ni-Fe accumulators.

7) Lithium Bromide is used in medicine as sedative.

8) Lithium bicarbonate and lithium salicylate have been used for treatment of rheumatism since the resulting Lithium urinate is soluble in water.

9) Lithium hydride is used as source of hydrogen for meterological purpose and for filling of balloons.

11) Lithium aluminium hydride is used as a reducing agent in synthetic organic chemistry. 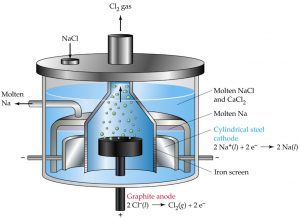 Sodium is extracted by the electrolysis of fused sodium chloride by a process called Down’s process.

Sodium is now obtained by electrolysis of a fused eutectic mixture of sodium chloride and calcium chloride in Down’s cell at 873 K using graphite anode and iron cathodes.

As a result of electrolysis ,sodium is liberated at the cathode and Cl2 is evolved at the anode.

1) Sodium is used as a reducing agent in the extraction of boron and silicon.

2) Sodium is employed as a reducing agent in form of sodium amalgam and as a reagent in Wurtz reaction and in the synthesis of many organic compound.

3) It is also used to make tetraethyl lead,  tetra methyl lead which are used as anti knocking agent for gasoline.

4) liquid Na or its alloys with potassium is used as a coolant in fast breeder nuclear reactor.

5) It is used in the manufacture of number of chemicals such as Na2O2 , NaCN, NaNH2.

6) It is used in sodium vapour lamp.

7) Sodium is largely used in industry for the production of artificial rubber , dyes, drugs.

8) Because of its lightness and high thermal conductivity, it is used for filling exhaust valves of aeroplane engines.

1) It has a vital role in biological system.

2) KCl is used as fertilizer.

3) KOH is used in manufacture of soap.

4) It is also used as an excellent absorbent for Carbon dioxide.