Beryllium shows resemblance with its diagonally opposite element aluminium.

Points of similarity are:

(1) Both metals have a tendency to form covalent compounds e.g. the chlorides of both being covalent are soluble in organic solvents.

(2) Both BeCl2 and AlCl3 act as a Lewis acids and are used as Friedel – Crafts catalyst.

(3) These two elements have same electronegativity and the polarising power i.e. charge/ radius ratio of their ions are very similar.

(4) BothBeCl2 and AlCl3 have chlorine bridged structures in the vapour phase. 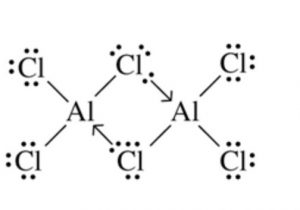 (5) Both Be and Al are resistant to the action of acids due to the formation of protective film of the oxides on their surface.

(6) Both the metals dissolve in strong alkalies to form soluble complexes: beryllates and aluminates.

(7) The oxides of both beryllium(BeO) and Aluminium(Al2O3) are hard, high melting insoluble solids.

(8) The oxides and hydroxides of both Be and Al are amphoteric and dissolve in sodium hydroxide solution as well as in hydrochloric acid.

(9) Carbides of both the metals react with water liberating methane gas.