You are here: Home / Class 11 / Chemistry / Hydrogen / Preparation of Hydrogen

Dihydrogen may be obtained from water by reduction either with active metals or by electricity.

(a) By the action of water on Active Metals

The reaction with alkali metal is so vigorous and exothermic that the hydrogen involved catches fire. To slow down the reaction, amalgams of these metals are generally used.

In amalgams, only a small surface area of the metal comes in contact with water ,and ,therefore the reaction is slowed down.

(b) By Electrolysis of Water

Dihydrogen of high purity is usually obtained by the electrolysis of water in the presence of small amount of an acid or a base. During electrolysis, dihydrogen is collected at cathode while dioxygen is liberated at anode.

This method is not commercially used since it is quite expensive.

Metals which are more electropositive than hydrogen (lie above hydrogen in the electrochemical series) such as Zn, Fe, Mg react with dilute mineral acids to liberate dihydrogen gas.

Metals like Copper ,silver ,Mercury which are less electropositive than hydrogen (lie below hydrogen in the electrochemical series) do not liberate hydrogen from acids. 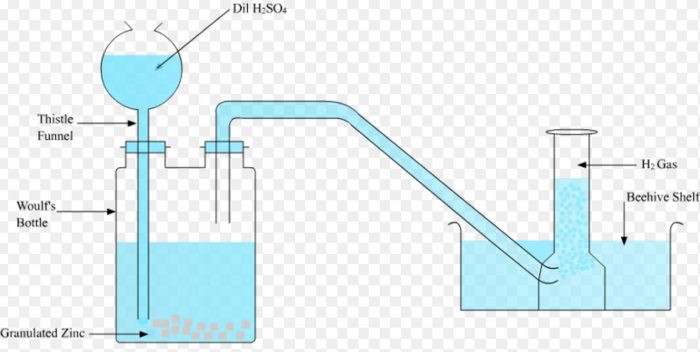 In laboratory ,dihydrogen is prepared by reaction of dil H2SO4 on granulated zinc.

Granulated pieces of zinc are placed in a Woulfe’s bottle and are covered with water. The bottle is fitted with a thistle funnel and a delivery tube.

Conc H2SO4 is poured slowly through the thistle funnel. As the acid falls in the Woulfe’s bottle ,it gets diluted and then reacts with zinc evolving dihydrogen gas. It is collected by downward displacement of water.

Sometimes the bubbles of dihydrogen produced stick to the surface of the zinc metal preventing the further reaction of the acid on the metal. Such a situation can be avoided by adding few crystal of copper sulphate to the reaction mixture.

(1) By the action of pure sulphuric acid on magnesium ribbon

(2) By the electrolysis of a warm solution of barium hydroxide using platinum or Nickel electrodes.

(3) By the action of water on sodium hydride

(4) By the action of KOH on scrap aluminium

(1) By the electrolysis of water 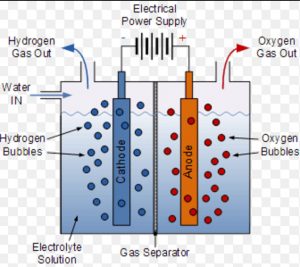 A small quantity of acid or alkali is added to water to make it a good conductor and electrolysed in a cell. In this cell ,iron sheet is used as a cathode while nickel plated iron sheet act as anode.

The two electrodes are separated from each other by an asbestos diaphragm  which prevents mixing of dihydrogen and dioxygen. On passing electric current, dihydrogen gas is collected at cathode while dioxygen at anode.

When 20% NaOH solution is used for electrolysis, the decomposition of water takes place as follows:

When super heated steam is passed over red hot coke or coal at 1270K in the presence of nickel catalyst, a mixture of carbon monoxide and dihydrogen is produced.

A mixture 1:1 of CO and H2 was called water gas. All mixtures of CO and H2 irrespective of their composition are called synthetic gas or syngas.

This process of producing syngas from coke or coal is coal gasification.

It is difficult to obtain pure hydrogen from water gas or Syngas, since CO is difficult to remove. To remove CO and increase the production of dihydrogen from syngas, CO of the syngas is oxidised to CO2 by mixing it with more steam at 673 K in presence of iron chromate as catalyst.

Chemical reaction in which carbon monoxide of the syngas reacts with steam to form carbon dioxide and more dihydrogen is called water gas shift reaction.

CO2 thus produced is removed either by scrubbing the mixture with sodium arsenide solution or bypassing the mixture through water under 30 atm pressure when carbon dioxide dissolves leaving behind dihydrogen which is collected.

Natural gas may also be used.

Dihydrogen may also be obtained by thermal cracking of natural gas at 1270 K in the presence of a catalyst.

Dihyrogen can also be manufactured by passing alternate currents of steam and water gas over red hot iron.It consists of two stages:

(1) Oxidation Stage: Super heated steam is passed over iron filling heated to about 1023 – 1073 K when hydrogen is formed and magnetic oxide of iron is left behind.

(2) Reduction stage: When the whole of iron has being oxidised, the steam supply is cut off and a steam of water gas is passed to reduce Fe3O4 back to iron.

By passing steam and water gas alternatively over heated iron, dihydrogen gas can be manufactured from a small quantity of iron.

Large quantities of dihydrogen are obtained as a by product in various industries.

(2) In the manufacture of sodium hydroxide and chlorine by electrolysis of brine solution.

(1) It is colourless, tasteless and odourless gas.

(2)It is the lightest substance known.

(3)It is slightly soluble in water since its molecules are non polar.

(4)It can be liquefied under low temperature and high pressure.

(1) The H-H bond dissociation enthalpy is the highest for a single bond between two atoms of any element.

Dihydrogen is quite stable and relatively inert at room temperature due to its high H-H .bond dissociation enthalpy. Therefore most of the reactions of dihydrogen occur at high temperature.

(3) Combustibility : It is highly combustible gas and burns in air or dioxygen with a pale blue flame to form water. It is not a supporter of combustion.

Dihydrogen reacts with strongly electropositive metals like Sodium ,Potassium ,calcium at high temperature to form salt like metal hydrides, in which the oxidation state of hydrogen is -1.

Dihydrogen combines with many non metals at high temperature in presence of a catalyst to form covalent or molecular hydrides.

(b) Reaction  with halogens

The reactivity of halogens towards dihydrogen decreases in the order:

(c) With dinitrogen it forms ammonia

Fe act as a catalyst while Mo act as a promoter. This reaction is used for the manufacture of ammonia by the Haber’s process.

Depending upon condition it forms Methane or acetylene.

(6) Reduction of metal oxides and ions

Dihydrogen acts as a reducing agent and hence reduces oxides of certain metals less electropositive than zinc such as those of Cu, Pb, Fe etc to corresponding metals.

Hydrogenation of unsaturated organic compounds in presence of heterogeneous and homgeneous catalyst is used in many industrial processes.

Olefins reacts with carbon monoxide and dihydrogen in presence of octacarbonyl dicobalt as catalyst under high temperature and pressure to form aldehydes.

This reaction is called hydroformylation or the oxo- process. The aldehydes thus obtained on subsequent catalytic reduction gives alcohols.

The vegeatable oil such as soyabean oil, cotton seed oil ,groundnut oil are called polyunsaturated oils since they contain many carbon carbon double bonds.When these oils are exposed to air for prolonged period ,the double bond present in them undergo oxidation and the oils become rancid i.e. develop unpleasant odour and taste due to formation of lower aldehydes and carboxylic acid.

Dihydrogen is bubbled through edible oils in presence of finely divided nickel at 473 K when the oils are converted into solid fats.

This process is called hydrogenation or hardening of oil and is used in the manufacture of vegetable ghee.

(1) in the manufacture of ammonia which is used for the production of various fertilizers.

(2) in the hydrogenation of vegetable oils to form solid fats

(3) in manufacture of bulk chemical such as methanol

(4) in the manufacture of hydrogen chloride

(5) in the manufacture of metal hydrides

(6) in metallurgy to reduce heavy metal oxides to metal

(7) in the atomic hydrogen and oxy-hydrogen torches for cutting and welding.

(8) Liquid hydrogen is used as a rocket fuel in space research.

(9) It is also used in fuel cells for generating electrical energy.It does not cause any pollution and produces greater energy per unit mass of fuel in comparison to gasoline and other fuels.