Hydrogen peroxide was discovered by the French Chemist J.L. Thenard in 1818.

Calculated amount of sodium peroxide is gradually added to an . ice-cold solution of 20% H2SO4.

Upon cooling crystals of Na2SO4·10 H2O separate out and the resulting solution contain about 30% H2O2.the solution also contains some dissolved Na2SO4 but it does not interfere with reactions of H2O2.

a) By the action of dilute sulphuric acid: A thin paste of hydrated barium peroxide is prepared in ice cold water and then added slowly to an ice cold solution of 20% H2SO4 .

The white precipitate of BaSO4 is removed by filtration leaving behind a dilute solution (5%) of H2O2.

H2SO4 also act as a catalyst for decomposition of hydrogen peroxide, therefore, the use of weaker acids such as H2CO3 and H3PO4  are preferred to H2SO4.

b) By the action of carbon dioxide or carbonic acid :

When a rapid stream of CO2 is bubbled through a thin paste of BaO2 in ice cold water, H2O2 and BaCO3 are produced.

The insoluble barium carbonate is removed by filtration leaving behind dilute solution of hydrogen peroxide.

c) By the action of phosphoric acid :

Hydrogen peroxide can also be prepared by the action of phosphoric acid on barium peroxide.

Hydrogen peroxide is manufactured by the electrolysis of a cold 50% solution of sulphuric acid at high current density in an electrolytic cell using platinum as anode and graphite as cathode.

Peroxodisulphuric acid formed around anode is withdrawn and then distilled with water under reduced pressure. The low boiling H2O2 distils over along with water leaving behind high boiling H2SO4 which is recovered and recycled.

If instead of 50% H2SO4, an equimolar mixture of H2SO4 and ammonium sulphate is electrolysed, a more concentrated solution of H2O2 is obtained.

Ammonium persulphate formed around anode is withdrawn and distilled with water to give hydrogen peroxide.

This process is now used for the laboratory preparation of D2O2 i.e. 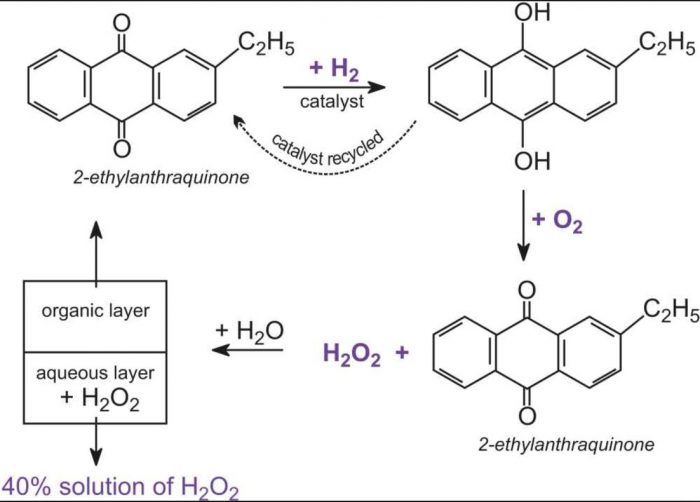 Hydrogen peroxide thus formed is extracted with water and the aqueous solution is concentrated by distillation under reduced pressure to give 30% hydrogen peroxide solution.

2- Ethylanthraquinone formed in the process is reduced with hydrogen in the presence of Pd catalyst to give back 2- ethylanthraquinol which is again used.

Hydrogen peroxide cannot be concentrated simply by distillation since its decomposers much below its boiling point to give water and oxygen.

Concentration of H2O2 is carried out carefully in a number of stages:

2) Dehydration in a vacuum desiccator 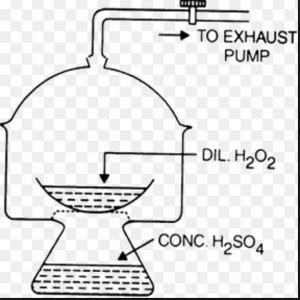 50% solution of hydrogen peroxide as obtained above is taken in a dish and place in a vacuum desiccator containing conc H2SO4 . Pressure inside the desiccator is reduced by connecting it to a vacuum pump. As a result of low pressure, water readily evaporates and the water vapour thus produced are absorbed by conc H2SO4.Hydrogen peroxide of about 90% concentration is produced.

The 90% solution of hydrogen peroxide as obtained above is subjected to distillation under reduced pressure. During this process, water distils over between 303-313 K leaving behind almost pure hydrogen peroxide.

4) Removal of last traces of water

1) Hydrogen peroxide cannot be stored in glass bottles since the rough surface of glass, alkali oxides present in it, and exposure to light catalyse its decomposition. Therefore hydrogen peroxide is usually stored in coloured paraffin wax coated plastic or teflon bottles.

2) To prevent composition of hydrogen peroxide some stabilizer such as urea, glycerine, acetanilide, phosphoric acid must also be added.

The strength of an aqueous solution of hydrogen peroxide is usually expressed in following ways:

1) Percentage strength:  It expresses the amount of hydrogen peroxide by weight present in 100 ml of the solution.

3) Hydrogen peroxide is more dense and more viscous than water. This is due to the reason that the molecule of hydrogen peroxide are even more highly associated through hydrogen bonding then Water molecule.

4) Its melting point is to 272.4 K. Since it decomposes vigorously on heating, it is not possible to determine its boiling point at atmospheric pressure. Its boiling point has been determined to be 423.2 extrapolation method.

5) It is completely miscible with water, alcohol and ether in all proportion.

6)The dipole moment of hydrogen peroxide is little more than that of water.

Pure hydrogen peroxide is an unstable liquid and decomposes into water and oxygen on long standing or heating.

It is example of auto oxidation and auto reduction.

The decomposition is further accelerated by the presence of certain metal ions, metal powders and metal oxides.Even charcoal, rough surfaces and light also catalyse its decomposition. The solution of hydrogen peroxide must be handle with care since they may explode with traces of organic matter or even specs of dust.

Pure hydrogen peroxide turns blue litmus red but its dilute solution is neutral to litmus. It thus behaves as a weak acid. Its dissociation constant is 1.55 × 10-12 at which at 298 K which is only slightly higher than that of water.

The acidic nature of hydrogen peroxide is shown by its neutralization reaction with Hydroxides.

Since hydrogen peroxide is a weaker acid than carbonic acid therefore it does not decompose carbonates and bicarbonates to evolve carbon dioxide gas.

Hydrogen peroxide behaves as an oxidising as well as reducing agent in both acidic and basic solution. The oxidation state of oxygen in hydrogen peroxide is -1 .It can be oxidised to oxygen or reduced to water or hydroxide ion.

Hydrogen peroxide is a powerful oxidising agent but a weak reducing agent.

Hydrogen peroxide act as an oxidising agent both in acidic as well as alkaline medium .

4) It reacts with ice cold acidified potassium dichromate solution to chromium pentoxide which dissolve in ether producing a blue colouration.

1) It oxidises sulphites, nitrites and arsenites to sulphates, nitrates and arsenates in alkaline medium.

4)It oxidises Chromium salts to chromates

5) It oxidises formaldehyde to formic acid

1) It reduces acidified potassium permanganate solution.As a result the pink colour of KMnO4  solution is discharged.

2) It reduces acidified potassium dichromate solution.As a result of this reaction, the orange colour of K2Cr2O7 changes to green due to the formation of chromium salt.

4)It reduces ozone to dioxygen

5) It reduces chlorine to HCl

5) It reduces halogen to halide ions

6) It reduces hypohalites to halides

The bleaching action of hydrogen peroxide is due to the nascent oxygen which it liberates on decomposition.

1) The most important industrial use of hydrogen peroxide is as a bleaching agent for delicate materials like Silk, wool, paper pulp, straw, oils and fats.

2) It is used as a hair bleach and as a mild disinfectant.

3) It is extensively used to manufacture inorganic chemicals like sodium perborate and  percarbonate which are important constituents of good quality detergents.

4) In the production of epoxides, propylene oxide and polyurethane.

5) Hydrogen peroxide is also used in the synthesis of hydroquinone, pharmaceuticals like cephalosporin and food products.

6) It is increasingly being used in Environmental chemistry to control pollution by treatment of domestic and industrial effluents, oxidation of cyanide and restoration of aerobic conditions to sewage waste.

7) It is used as an antiseptic under the name perhydrol for washing wounds, teeth and ears.

8) It is used for restoring the colour of lead painting which have blackened due to action of H2S present in the air on lead paints.

9) It is used in laboratory for detecting the presence of chromium, titanium and vanadium salts with which it yields peroxides of characteristic colours.

10) 93% hydrogen peroxide solution is used as an oxidant for rocket fuel and as a propellant.

11) It is used as antichlor in textile industry to remove excess of chlorine after bleaching operations.

12) A mixture of hydrazine hydrate and hydrogen peroxide with copper catalyst is used as a rocket propellant.

1) Hydrogen peroxide on treatment with a acidified solution of Titanium salt gives a Yellow or Orange colour due to the formation of pertitanic acid.

2) It liberate iodine from KI solution which, in turn, gives blue colour with starch solution.

3) When  an ethereal solution of H2O2 is shaken with acidified solution of K2Cr2O7 ,blue colour appears in the ethereal layer due to the formation of chromium pentoxide.

4) When brought in contact with hydrogen peroxide solution, a filter paper with black stain of PbS turns white.

3) The two O-H bonds are however in different planes due to repulsion between different bonding and antibonding orbitals.

4)The dihedral angle between the two planes being 111.5° in gas phase but it reduces to 90.2 ° in the crystalline state due to hydrogen bonding.