When ordinary water is electrolysed, protium is liberated much more readily than deuterium because of the following reason:

a) Being smaller in size, H+ ions have greater mobility as compared to D+ ions.

b) Because of lower discharge potential, H+ ions are discharged at the cathode more easily than D+ions.

The electrolytic cell designed by Brown, Degget and Urey for the preparation of heavy water is: 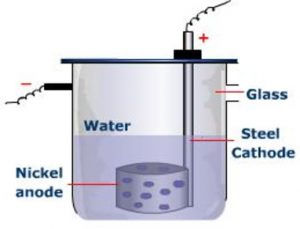 3) A large number of such cells are employed for electrolysis of water in number of stages.

At normal atmospheric pressure the boiling point of ordinary and heavy water are 373 K and  374.42 K. Small difference in their boiling points forms the basis of preparation of heavy water by fractional distillation of ordinary water. Fractionating column of the order of about 12 metres height are employed.

1)It is colourless, odourless and tasteless mobile liquid heavier than water. Because of higher molecular mass there is a marked difference in physical properties of ordinary water and heavy water.

The reactions of heavy water with most of the substances proceed at a much slower rate as compared to ordinary water.

1) Electrolysis : When heavy water is electrolysed,  dideuterium is obtained at the cathode.

The oxides of active metals like Sodium and Calcium reacts slowly with heavy water to form their respective deuteroxides.

Heavy water also combined with many compounds as heavy water of crystallization.

When treated with heavy water ,many compounds exchange their active hydrogen atoms either partially or completely with deuterium.

Heavy water is injurious to human beings, plants and animals since it slows down the rates of reaction occurring in them.

2) As a tracer compound:

Heavy water is widely used as a tracer compound for studying the mechanism of many reactions.

Heavy hydrogen or dideuterium is produced by the electrolysis of heavy water or by its decomposition with sodium metal.