A reaction which takes place not only in forward direction but also in the backward direction under the same conditions is called reversible reaction,

If a reaction cannot takes place in the reverse direction i.e. the products formed do not react to give back the reactants under the same conditions, it is called irreversible reaction.

It is represented by putting a single arrow between the reactants and products, pointing from reactants towards products.

A reversible reaction becomes irreversible if one product is allowed to escape out. 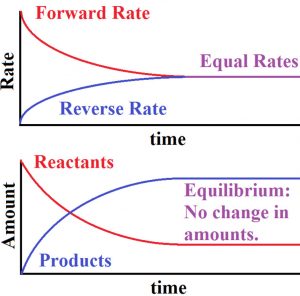 4) A stage comes , when the rate of forward reaction becomes equal to rate of backward reaction. The reaction is then said to be in a state of chemical equilibrium.

1) Decomposition of calcium carbonate in a closed vessel

If calcium carbonate is heated in a closed vessel, the reaction is reversible:

If the temperature of the furnace is kept constant and the vessel is connected to a manometer, the pressure first keeps on increasing and ultimately becomes constant. Now as much of CO2 is formed from CaCO3 ,the same amount of CO2 reacts with CaO to give back CaCO3. The rate of forward reaction and backward reaction have become equal. Hence the reaction have attained chemical equilibrium.

2) Decomposition of N2O4 in a closed vessel

The decomposition of N2O4 in a closed vessel is a reversible reaction as:

N2O4 is almost stable at 0° C and is almost colourless. If N2O4 is taken in a glass bulb which is then sealed and placed in ice, it is almost colourless. If the sealed glass bulb is shifted into a vessel containing water at 25°C , the bulb starts acquiring brown colour which first deepens and then becomes constant. This indicates a state of equilibrium in which the concentration of N2O4 and NO2 have become constant.

That both are present in the reaction mixture can be tested by increasing the temperature of the bulb further  when brown colour depends and by cooling the bulb down from 25°C when the brown colour fades.

If H2 and I2 are enclosed in a glass bulb at 500°C ,the colour is deep purple in the beginning but as the time passes ,the intensity of the colour decreases and then no further change in colour is observed .This again indicates that the reaction has attained a state of equilibrium.

In the Haber’s process ,starting with definite amount of N2 and H2 and carrying out the reaction at a particular temperature, when equilibrium is attained ,the concentration of N2, H2 and NH3 become constant.

This shows that an equilibrium , the reaction is still going on i.e. equilibrium is dynamic in nature.

1) At equilibrium, the concentration of each of the reactants and products becomes constant.

3) A chemical equilibrium can be established only if none of the products is allowed to escape out or separate out as solids.

5) A catalyst does not alter the state of equilibrium.