Question 1 What are the main functions of plastids?

Question 2 What are the major categories of plastids?

Question 3 Name the plastic which is green in colour and involved in photosynthesis?

Question 4 Why plastids are called as kitchen of cell?

They are present in plant cell but absent in animal cell.

They have their own DNA and Ribosomes. They have a power to divide.

They are involved in photosynthesis because they have green pigment called chlorophyll.They are called as kitchen of cell. 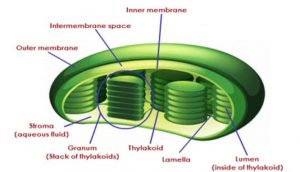 Each chloroplast is surrounded by 2 membranes. It has 2 regions:

1) Grana (site of light reaction):It is a stack of membrane bounded,flattened discoid sac containing the molecules of chlorophyll.

1) They trap solar energy and utilise it to manufacture food for plant.

3) They store food in form of carbohydrates, fats and proteins.