Question 1 What are pure substances?

Question 2 What is a mixture? Give 5 examples of mixtures?

Question 3 Why do we need to separate different components of a mixture? Explain with example?

Question 4 Name a solid, liquid and a gaseous mixture?

Question 5 State one use of winnowing?

Question 6 Give one use of the hand-picking method of separating mixture?

Question 8 What is threshing?

Question 10 Which method is used to separate grains from stalks?

Question 11 Name the method used to separate husk from wheat?

Substances which contain particles of only one kind is called a pure substance.

Substances which contain particles of different kinds is called an impure substance or mixture. A mixture is made up of two or more pure substances.

The components of a mixture retain their original properties. A mixture shows the properties of all the substances present in it.

For example : Air is a mixture of gases such as oxygen, nitrogen, carbon dioxide and water vapours. Air shows the properties of all its components.

Most of the things which we use in our daily day to day life are mixtures. For example : air, water, salt, milk, tea, coffee, sugar cane juice, petroleum, soil etc.

A mixture can be solid, liquid or gas. Soil is a solid mixture, milk is a liquid mixture whereas air is a gaseous mixture.

The mixtures are separated into their components for various purposes such as :

(1) To remove an undesirable component

We make a cup of tea by boiling tea leaves in water and then adding sugar and milk. Used tea leaves are an undesirable component of the mixture called tea. These are separated by using a filter called tea strainer.

(2) To remove a harmful component

(3) To obtain the pure sample of a substance

Tap water contains some dissolved salts in it, so it is an impure substance. It cannot be used for preparing medicines. So we separate the dissolved salt from the tap water to obtain a pure sample of water called distilled water.

(4) To obtain a useful component

Petroleum oil is a mixture which cannot be used as a fuel in homes and vehicles etc. We  separate the petroleum mixture to obtain useful components like kerosene, petrol and diesel. Kerosene is used as a household fuel whereas petrol and diesel are useful as fuels in vehicles.

Methods of Separating of Mixtures

The basis for choosing method of separating the components of a mixture is the difference in physical properties of the components.

When a food grain crop like wheat or paddy matures, it is harvested from the field. The harvested crop is then dried in the sun. We get bundles of stems or stalks of dried crop plants which have grains attached at their top.

The grains attached to the stems or stalks are covered in a thin layer called chaff. Each stalk has a large number of chaff covered grains. Grains are separated from stems or stalks and Chaff.

The grains are separated from stems or stalks by process of threshing. Threshing is the process in which stems of wheat or paddy are beaten to separate grains from the stems and from the chaff that cover the grains.

Stalks or stems of crop plants and the chaff are soft material whereas the grains themselves are very hard. Being soft, stalks and chaff can be broken into pieces on beating but the grains remain unaffected.

Threshing is done by holding the bundles of stems in hands and hitting them on a hard surface. In this way the grains separate from the stems.

Threshing is also done with the help of a cattle. The harvested and dried crop plants are spread on the ground in a small area, and various cattle such as buffaloes, camels are made to walk over them in circle again and again, for a considerable time. The cattle’s feet crush the stems  or stalks due to which the grains get separated from stems. This crushing also breaks the chaff around the grains and hence the grains get separated from chaff. During threshing, the stalks are converted into very small pieces called hay which is used as a dry fodder for cattle. The broken chaff forms the husk. A motorised machine called thresher is used for threshing process. 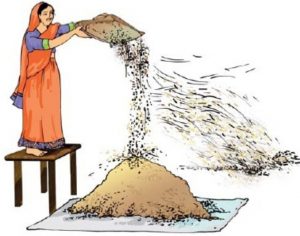 When a farmer threshes wheat crop in his field, he gets a mixture of wheat grains and husk. Before wheat grain can be used, husk has to be removed from them. The husk is separated from wheat grains by method of winnowing.

The method of winnowing is used to separate husk from various types of grains like wheat, rice.

We cannot separate small stone particles from wheat by the process of winnowing. This is because stone particles are quite heavy which cannot be carried away by wind to a greater distance. 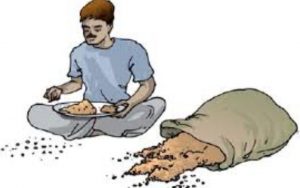 The method of hand picking is used to separate those mixtures where one of the component is in small quantity.

The method of hand picking is used to separate undesirable substances such as small pieces of stones from wheat, rice and pulses.